Man with a Beard but No Hair

Man With a Beard But No Hair

Fire-Starting Side of V.F.D.

The Man With a Beard But No Hair is a mysterious antagonist. He is so villainous that even Count Olaf fears him, and his name apparently brings such terror that it is never mentioned. He is known to have an associate that is referred to as the Woman with Hair but No Beard.

The Man seems to have been in V.F.D. for a time predating The Schism; following it, he and the Woman with Hair but No Beard were planted firmly on the side of the Fire-starters.[2]

The Sinister Duo also had a regular occupation as high court judges. They used their position as judges to gain information on the Baudelaire case from the third judge, Justice Strauss. They also gained knowledge of the V.F.D. trial to take place at the Hotel Denouement, and thus arranged to rig it.[1]

He and the Woman with Hair but No Beard also managed to enslave the V.F.D. Eagles, threatening them with the punishment of a brutal whipping if they did not follow orders.

They somehow discovered the Self-Sustaining Hot Air Mobile Home, and oped to catch up to and destroy it. Upon their decision to burn the V.F.D. Headquarters in the Mortmain Mountains, they also plan to capture the Snow Scouts during their celebration of False Spring.

The two of them somehow manage to acquire the Snicket File, with the exception of the thirteenth page.[2]

Dewey Denouement claims that he and Kit Snicket, at some point, searched his childhood home.[1]

The Man and Woman arrive at the V.F.D. headquarters and slowly burn it down, room by room in order to keep the smoke to a minimum so they would not be spotted. Every morning of the arson, the two of them would celebrate with a bottle of wine and finger puppets. They do did attempt to search the headquarters for the Sugar Bowl, but are unable to find it.

The Man and Woman, dragging a toboggan along with them, then arrive at Count Olaf's campsite, frightening him and his troupe. The Man is noted to kiss Esmé Squalor's hand, which makes her tremble. They notice Sunny Baudelaire, and the man inspects her, saying that she has caused almost as many problems as her parents. They tell the troupe about their arson of the headquarters, and mention they are headed next to Caligari Carnival to burn an important piece of evidence hidden in a figurine, and then congratulate Olaf when he tells them that he'd already burnt the area. They present them with two gifts- the Snicket File, which they plan to read and burn together, and then the Man presents Esmé with what he believes to be a cigarette, knowing that she likes things that are In, unknowingly providing Sunny with a Verdant Flammable Device.

Sunny uses the device to light a fire with suspicious smoke in order to attract attention. When the Man, Woman, Olaf and Esmé see, they grow angry, and the Man extinguishes the device with a handful of snow, before threatening to throw Sunny off the mountain. The Man then tells Olaf that they have more scheming to do, in order to help recruit more young people, and destroy the last safe place, the Hotel Denouement.

Much later, while Violet Baudelaire and Quigley Quagmire are hiding under Olaf's car, the Man and Woman inform him that they need help to spread the net on the ground for their recruitment scheme. Esmé asks the Man for more cigarettes, and he informs her that he'd only found one before they leave.

The next day, Violet, Quigley and Klaus Baudelaire return, masked, with Esmé Squalor, who they'd planned and failed to capture. They announce they are volunteers who want to trade information for Sunny Baudelaire, and upon hearing they are volunteers, he and the Woman give the children a "confused frown," as if unsure whether they should be scared or scornful.

Olaf and Esmé argue over whether or not to trade Sunny for information on the Sugar Bowl, until the Man grows tired and orders them to stop, and the Woman orders that Sunny be brought over. The Sinister Man then summons his eagles, bragging about their plan to capture the Snow Scouts, and then offering to let the volunteers join them after they tell them where the Sugar Bowl is.

The Snow Scouts soon arrive and fall into the trap, and the Man orders the eagles to lift him and the Woman into the air, before the eagles scoop up the children in a net. The Man gloats that they will be able to catch up to the Self-Sustaining Hot Air Mobile Home, and then he and the Woman are carried away by eagles.

Woman with Hair but No Beard: The Baudelaires have taken off their blindfolds!
Man with a Beard but No Hair: Yes! They're guilty of contempt of court!
Violet Baudelaire: We certainly are. This court is worthless and dishonorable!
—The Penultimate Peril

The Man with a Beard but No Hair and the Woman with Hair but no Beard infiltrate the trial at the Hotel Denouement. However, during the Baudelaires' testimony, the children recognize their voices and refuse to play along, removing their blindfolds. The judges announce that the Baudelaires are guilty of contempt of court, while the children beg the audience to peek in order to see the villainous judges, as well as Count Olaf kidnapping Justice Strauss. The crowd bursts into argument, while the Man attempts to pronounce the children guilty as they escape.

As chaos descends, the children and Olaf set a fire in the hotel's laundry room. When they arrive on the first floor and the children attempt to warn everyone, the Man congratulates Olaf. Upon being overheard by Jerome Squalor, he claims that he wants to capture Olaf and pushes Jerome towards his direction. Upset at this betrayal, Olaf claims that he always knew the two of them would fail him someday.

It is unknown if he and the Woman with Hair but No Beard survived the Hotel Denouement Fire; however, considering they were on the first floor and aware of the fire, it is likely that they escaped.

The Man with a Beard but No Hair and the Woman with Hair but No Beard are first seen in The Slippery Slope: Part One, chasing Kit Snicket around the top of Mount Fraught. After Kit jumps off, the pair runs into Hugo, Colette and Kevin who they threaten with swords. It is later implied that they killed them.

When they visit Olaf, it is revealed they raised him as mentors. They don't congratulate him on his destroying of Caligari Carnival and reveal that it was them who burnt down the VFD headquarters while also being quite disappointed in his failures to capture the Baudelaires. Because of this, Olaf attempts to kill Sunny Baudelaire in order to gain their respect, but fails. They actually take a shine to Esmé Squalor, much to Olaf's envy. Later, the Man and Woman are seen watching various fires throughout the City burn.

Although they do not physically appear again until The Penultimate Peril, they arrange the boat that Olaf and his remaining team use to pursue the Baudelaires through the sea. They specifically had the boat arranged for Esmé rather than Olaf, angering him further.

They later appear as Justice Strauss's fellow judges of the high court. Toward the end of The Penultimate Peril episodes, they belittle Olaf for not starting a fire, as he tells them that the smoke they can smell is coming from a barbecue. He claims this in the hopes of having them burn to get revenge for how they treated him. They are never seen again, leaving their fates unknown.

He is portrayed by Richard E. Grant.

In the books, he is described as having an aura of menace first and foremost, scaring even Esmé Squalor and Count Olaf. He is known to have a beard and a bald head, as well as a very hoarse voice, a cold grin and horrible laugh. He and the Woman with Hair but no beard dress in fireproof suits in order to better cause arson, which are made of shiny blue fabric with two large shoulderpads.

Esmé Squalor: I thought maybe snow gnats werre no longer in.
Man with a Beard but No Hair: Don't be ridiculous, Esmé. The gnats aren't around because tey can smell the smoke.
—Chapter Six

Esmé Squalor: But if you burned down the headquarters room by room, didn't all the volunteers escape?
Man with a Beard but No Hair: They were gone already. The entire headquarters were deserted. It was as if they knew we were coming. Oh well, you can't win them all.
—Chapter Six

Man with a Beard but No Hair: That's enough! Our recruitment scheme is about to be put into action. We can't have you arguing all day long.
Count Olaf, timidly: We wouldn't have argued all day long. After a few hours--
Woman with Hair but No Beard: We said that's enough!'
—Chapter Thirteen

Klaus Baudelaire: Eagles aren't mammals! They're birds!
Man with a Beard but No Hair: They're slaves.
—Chapter Thirteen

Woman with Hair but No Beard: What are you waiting for, orphans?
Man with a Beard but No Hair: Yes. Continue your story.
—Chapter Eleven 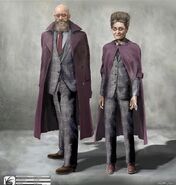 The duo threatening the carnival freaks. 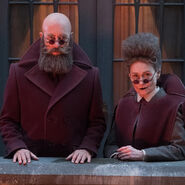 The duo watching the city burn... 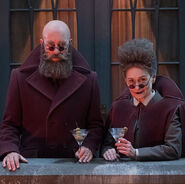 The duo being warned of the fire in Hotel Denouement.