File Under: 13 Suspicious Incidents
The Mann Family are a wealthy family from Stain'd-by-the-Sea.

The Mann family seems to be extremely wealthy, due to the fact they have an enormous, sprawling mansion, as well as very expensive fish scale mosaics created by Mr. Mann. The Mann parents were married for thirty-seven years until Mr. Mann's death.

The family was very involved in the local theatre, the Stain'd Playhouse. While Old Lady Mann ran the ticket stand, her husband acted in several plays, while Hans built the sets with Billy Becker and his sister made costumes.

After the death of Mr. Mann, the daughter left to join the air force, Hans went to the city to work in a staple gun factory, and Old Lady Mann lived alone in the Mann Mansion with Billy Becker.[1] 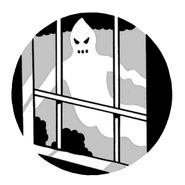 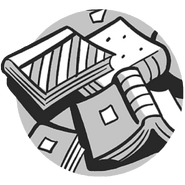