Mattathias Medicalschool (last name is pronounced Meh-dickle-school) is Count Olaf's seventh disguise and appears in The Hostile Hospital. He claims to be the new Human Resources director of Heimlich Hospital, after Babs. He also claims to be the head of Hospital Administration, but has nothing to do with party planning.

In the book, he is only a voice on an intercom, and his surname is not mentioned.

In the TV show, he appears visually as a doctor. He also speaks in a voice similar to early 1900s radio presenters.

"I wanted to look steampunk and threatening. Cynthia and I looked at old images of surgeons from the turn of the century and found those surgeon coats that looked more like butchers aprons, which seemed appropriate." - Neil Patrick Harris on Dr. Mattathias Medicalschool. 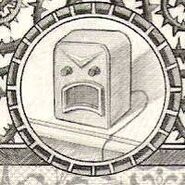 Olaf pressuring Klaus to chop off his sister's head.