Max Greenfield is the American actor in the Netflix adaptation of A Series of Unfortunate Events. He portrays Frank, Ernest and Dewey Denouement.

Greenfield was originally reluctant to have a mustache as part of his character as the Denouements, as he believed he would look like Freddie Mercury. After it was tested, though, he emailed Barry Sonnenfeld asking to keep it. "It looked fantastic and so period."[1] 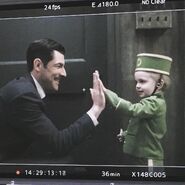 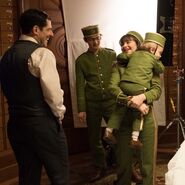