Milt is a middle-aged individual who is the owner of Last Chance General Store. Although he is a generally hospitable individual, his critical thinking is obviously questionable given that he treats the The Daily Punctilio as gospel.

He meets the Baudelaire orphans after they escape from the Village of Fowl Devotees having been accused of murdering Jacques Snicket, who was mistaken for Count Olaf. He gives them cranberry muffins.

Milt and the store's newsboy, Lou, attempt to capture them after the latter shows him the headline of The Daily Punctilio, but their attempt proves futile as the children escape to Heimlich Hospital with the Volunteers Fighting Disease.

In the movie, there is a small scene of Olaf with the grocery clerk, who may be Milt, but it is unclear if the two are the same.

In the Netflix TV series adaptation of A Series of Unfortunate Events, Milt was portrayed by Serge Houde. Unlike the book, the Baudelaires flee because of Count Olaf arriving as the newspaper showed up after his arrival.

Possibly Milt in the movie. 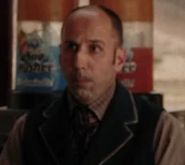