On Decision Day, due to ingestion of the Medusoid Mycelium (possibly)

Cook and Meal Prepper for The Island

Miranda Caliban is the mother of Friday Caliban. She is a resident of the Island.

At some point, Miranda and her husband, Thursday, lived on The Island. As Thursday informed Kit Snicket of the schism it suffered, this implies that he and Miranda arrived when the Baudelaire Parents were still in charge.

While Miranda was pregnant, Thursday left the Island, presumably due to a distaste for Ishmael's rules. Miranda gave birth to Friday, and Ishmael suggested that Miranda lie about the schism that separated Friday's parents in order to keep the young girl from being troubled. Miranda followed his suggestion and told her that Thursday died during a storm when he was devoured by a manatee.

While on the island, Miranda did most of the cooking for the colony. They mainly ate seafood; for breakfast, seaweed salad, for lunch, ceviche, and for dinner, mild onion soup with a handful of wild grass. They did not have spices, as none washed up, and if they did, Ishmael believed that they would upset the stomachs of the colonists who were used to spiceless ceviche. The only drink on the island was fermented coconut cordial, which, unbeknownst to anyone but Ishmael, created an opiate, which drugged the colonists into being more susceptive to Ishmael's suggestions.

Every year on Decision Day, the colonists would wait to see if anyone wished to leave the island; this was the only day it was possible, as the coastal shelf flooded. If nobody did, they would set the outrigger, which they spent a year building, on fire, and watch it push out to sea.

She did seems to be very loyal to Ishmael, as she follows his suggestions, and does not let Friday learn how to read in case she may "upset herself." However, though Ishmael felt it was not the customary way to swim, Miranda learned the backstroke secretly from Erewhon, and in return, Miranda gave her a picnic basket. Despite this, Finn says that Miranda is not the type to keep secrets.[1]

Miranda welcomes the Baudelaires, and Sunny Baudelaire joins her in cooking. While Sunny is allowed to do something in her area of expertise, she is bored by how easy the meals are to prepare. Miranda and Caliban tend to spend most of their days sipping coconut cordial and staring at the sea.

When Count Olaf arrives on the Coastal Shelf, claiming to be Kit Snicket, Miranda quickly says that he's clearly not her. The islanders fetch Ishmael, and put him in a cage. When Miranda says that Olaf has been nothing but treacherous and the Baudelaires nothing but good, he reveals that they have kept items secret. When the Baudelaires refuse to abandon Kit, Ishmael suggests they be left behind on the coastal shelf to drown when Decision Day comes. Friday looks as though she might cry and tries to say something, but Miranda puts a firm arm around her and drags her away.

The next morning, the island suffers a schism, as several islanders revolt from Ishmael's teachings. When Ishmael and the Baudelaires arrive on the scene, Miranda and Friday are standing back-to-back as if they would never speak to each other again. Miranda is aghast when Friday reveals that Professor Fletcher taught her how to read.

Count Olaf arrives and tries to explain a story; he mentions an associate with a weekday for a name, and when Miranda guesses it's Thursday, he claims it was Monday. Ishmael shoots Olaf with a harpoon gun, releasing the Medusoid Mycelium, which infects all the islanders. Though the Baudelaires beg the colonists to follow them to the far side of the island, Ishmael simply suggests they drink their cordial.

Drugged into compliance by the cordial, the islanders follow Ishmael onto the outrigger, which he claims will take them to Lousy Lane for a cure. Klaus Baudelaire tries to bring a hybrid apple to Friday, which will cure her; Friday, less affected by the cordial, claims she doesn't want to lose any more of her family after her father. When Klaus attempts to tell her that her father is alive, Miranda gives him a terrible look and pulls her daughter away, condemning them to death. She tells Friday not to rock the boat and to drink more cordial.

It is unknown if she met her fate by being poisoned by the Medusoid Mycelium. However, it is noted that the Incredibly Deadly Viper followed the boat with an apple, and as the Baudelaires did not know this, it is possible some islanders survived to report this to Lemony Snicket. Friday knew the snake to be friendly, and thus may have taken the apple from it; however, it is unknown if she would have been able to convince Miranda or the drugged islanders to eat it.

Instead of lying about her backstory, Miranda shares to the Baudelaires that she was in a shipwreck after her boat crashed onto an iceberg; pregnant with Friday, she washed up on the island. Due to the coconut cordial's effects, she does not remember much of her life before then, as it all feels hazy.

Instead of being the island's cook, that responsibility seems to belong to Alonso. Miranda and Friday seem to be much closer, and Miranda is rarely seen far apart from her daughter, who is usually hugging her.

Miranda has much less of a role; she only welcomes the Baudelaires, drinks cordial with the islanders, and is in the crowd when the Baudelaires arrive with news about the opiate and Count Olaf and Kit Snicket appear.

After Count Olaf releases the Medusoid Mycelium, Friday is seen to her mother, and Miranda rushes to the outrigger to follow Ishmael to Lousy Lane. She may have survived, as the Incredibly Deadly Viper is seen delivering an apple to the boat.

She is portrayed by Angela Moore.

Klaus Baudelaire: Do you eat ceviche for every meal?
Miranda Caliban: Certainly not. That would get tiresome, wouldn't it? No, we only have ceviche for lunch. Every morning we have seaweed salad for breakfast, and for dinner we have a mild onion soup served with a handful of wild grass. You might get tired of such bland food, but it tastes better if you wash it down with coconut cordial.
—Chapter Four

Count Olaf: My name is Kit Snicket, and I've been looking everywhere for these children.
Miranda Caliban: You're not Kit Snicket!
—Chapter Six

Weyden: I arrived on a raft of books myself.
Professor Fletcher: But you abandoned them.
Larsen: She did nothing of the sort! You helped her hide them, so you could force those children to read!
Friday Caliban: We wanted to learn to read!
Miranda Caliban: You're reading?
Madame Nordoff: You shouldn't be reading!
—Chapter Eleven 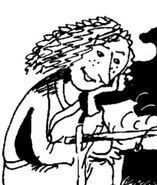 Miranda in the Russian version.

Miranda and the cordial.