The Mortmain Mountains are a mountain range near the Hinterlands that were first mentioned to the Baudelaires by Jerome Squalor in The Ersatz Elevator, when he speaks of Mount Fraught, the highest peak in the range.

The Mountains are home to the notorious Snow Gnats, the cavern that sheltered both the Volunteer Feline Detectives and the Snow Scouts, and the Valley of Four Drafts. The V.F.D. Headquarters was located there before its eventual destruction. The Stricken Stream is located in the mountains, with its source at the peak of Mount Fraught.

When the Man With a Beard But No Hair and the Woman With Hair But No Beard first started the fire at the penultimate safe place for V.F.D. volunteers, the sugar bowl was tossed out of a window into the Stricken Stream. It eventually flowed into the sea where it rested beneath Anwhistle Aquatics for some time before it was moved.

The range is excruciatingly difficult to climb, since it consists of sheer drops and a plateau arranged like a staircase. The temperatures are often cold during winter and False Spring. Blizzards and ice further hinder climbing, though it is not impossible to hike with the right equipment.

Locations in the Mortmain Mountains

The top of the mountains, a frozen waterfall leading to Mount Fraught. 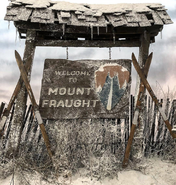