Mr. Remora was the Language Arts teacher at Prufrock Preparatory School in A Series of Unfortunate Events.

He taught a class that passed for English in Room One. His method of teaching involved telling short stories (often about himself) and quizzing the students on minute details. In his class were Carmelita Spats and Duncan Quagmire, the latter of whom often managed to take notes on the monotonous stories to study from.

One of his duties appears to be keeping track of students are absent from Vice Principal Nero's violin recitals, along with his coworker, Mrs. Bass.

He has a habit of constantly eating bananas in a rather messy way, as indicated by the peels dropping on the floor.[2]

Upon arriving at Prufrock, Violet Baudelaire is enrolled in Mr. Remora's class, which she hates so much that "she'd almost rather stay in the Orphans Shack all morning and eat her meals with her hands tied behind her back[... than] learn from such a wretched man."

During one of Nero's recitals, the Baudelaires notice that Mr. Remora and Mrs. Bass are giggling and sharing a banana in the back row of the auditorium. Neither of them seem to be aware of the new gym teacher, Coach Genghis.

After Violet begins to participate in S.O.R.E. in gym class, Mr. Remora realizes that her academic performance is suffering so after she failed a test, he reports the complication to Nero. Nero instructs both him and Mrs. Bass to make comprehensive exams to give to Violet and her brother, Klaus Baudelaire, on everything they have learned since they've arrived at the school, in order to determine if their conduct are grounds for expulsion.

The next morning, the two teachers and Nero arrive at the Orphans Shack to quiz the Baudelaire siblings. Mr. Remora quizzes Violet and discovers that she is able to correctly answer all of his questions. After eating eight bananas, Mr. Remora tells Nero that Violet is a very fine student who has obviously studied hard so there was no need to continue the examination. Nero is upset, since he wanted to expel someone, so Mr. Remora suggests Carmelita because she never studies and "is an awful person besides." Nero refuses not only because of his nepotism for her, but also because she was Genghis's special messenger. This causes Mr. Remora to request information on the gym teacher, who soon arrives.

Genghis reveals that the Baudelaires skipped gym class to study, which Nero uses as an excuse to justify failing the Baudelaire siblings. Mr. Remora objects against the decision by pointing out to the Vice Principal that he is incorrect about saying Sunny Baudelaire is a terrible secretary (she did quite a bit of stapling for him), and he also argues that the children practiced excellent time management by putting their studies above their athletics. However, once Nero asserts his authority as Vice Principal and expels Violet, Klaus, and Sunny nevertheless, Remora concedes and dismisses his argument.

When the Baudelaires race after a fleeing Coach Genghis, the teachers and Arthur Poe catch up to them in time to discover he has kidnapped the Quagmire triplets and that he is actually Count Olaf in disguise.

After choking on a banana, Mr. Remora decided to retire from Prufrock. Ms. K replaced him as the English teacher, and she changed the curriculum from telling short stories to giving coded books to the children, causing her to be fired due to complaints from Mr. and Mrs. Spats and kidnap two orphans.

It is unknown if Remora took his job back following Ms. K's departure.

Remora receives an invitation for a party with an all-you-can-eat banana buffet. He goes with Nero and Bass to the Hotel Denouement for the event, though both of them believe the party will feature different things, and Bass is on the run after robbing from Mulctuary Money Management.

As a concierge arrives- Sunny Baudelaire in disguise- Remora and Bass beg Nero to cease violin practice for a little bit in order to have a lunch break. When Nero finally agrees, Remora asks Bass if she should bring her loot with her, unintentionally pointing out the stolen money to Sunny. The group heads to an Indian restaurant in Room 954, where Hal attempts (and fails) to give them VFD codes. Remora asks for forty-eight orders of fried bananas. While waiting for their meals, Nero mentions Coach Genghis, who he remembers as being a nice man, and Remora points out that he was a notorious villain in disguise. He also attempts to bring up Bass's status as a fugitive, but Nero interrupts him and asks Sunny to bring them napkins. All that is mentioned of the rest of the meal is that the staff had a whispered conversation.

When an argument breaks out at night over whether or not the Baudelaire children are murderers, Remora mentions that they were pretty good students.

At the trial for Olaf and the Baudelaires the next day, Remora submits grade books as evidence. When chaos breaks out over whether or not the children are to be trusted, Remora shouts that they are good students.

Remora is last seen wandering around the seventh story with Nero, wondering something about fried bananas. It is unknown whether he survived the subsequent Hotel Denouement Fire.

Remora's role in The Austere Academy is relatively the same as in the books, as he tells boring short stories in his class. He and Mrs. Bass also unknowingly intercept the Quagmires' attempts to warn the Baudelaires that Count Olaf is on the property. He later assists Vice-Principal Nero and Mrs. Bass in quizzing the Baudelaires in front of the school.[3][4]

He and Mrs. Bass later go to Caligari Carnival to watch someone get devoured by lions. He was mistaken as a freak, to which Mr. Remora quotes that he has a skin condition.[5]

He is portrayed by Malcolm Stewart.

Mr. Remora: In my story about the donkey, how many miles did the donkey run?
Violet Baudelaire: Six.
Vice Principal Nero: "Six." That can't be correct, can it, Mr. Remora?
Mr. Remora: Um, yes, actually.
—Chapter Twelve

Mr. Remora: In my story about the mushroom, what was the name of the chef?
Violet Baudelaire: Maurice.
Vice Principal Nero, mimicking: "Maurice."
Mr. Remora: Correct.
—Chapter Twelve

Mr. Remora: In my story about the dump truck, what color were the rocks it carried?
Violet Baudelaire: Gray and brown.
Vice Principal Nero: "Gray and brown."
Mr. Remora: Correct.
—Chapter Twelve

Mr. Remora: Oh, let them stay, Nero. Why don't you expel that Carmelita Spats? She never studies, and she's an awful person besides.
Mrs. Bass: Oh yes. Let's give her an extra-challenging examination.
—Chapter Twelve

Vice Principal Nero: That foreigner's head reminds me of that nice man Coach Genghis.
Mr. Remora: Nice man? If I remember correctly, he was a notorious villain in disguise.
—Chapter Six

Remora is described as having a thick, dark mustache, "as if somebody had chopped off a gorilla's thumb and stuck it above [his] lip."[2] When he is seen at night, it is said he has a nightcap shaped like a banana.[6]

Mr. Remora in the books. 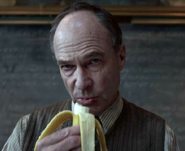 Remora in the TV series. 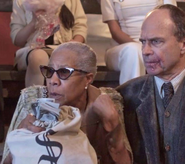 Remora at the lion show.