Before "The Penultimate Peril"

Odious Lusting After Finance (known in the TV series as The Complete History of Injustice or Odious Lusting After Fortunes), was a book featured in The Penultimate Peril. It was created as a result of detailed research on the lives of the Baudelaire orphans and their misfortunes that was said to contain enough evidence to lock Count Olaf, his associates, and possibly much of the Fire-Starting side of V.F.D. away in prison.

Jerome Squalor wrote the book and said it is about the injustices of the world. According to Jerome, it "chronicles the history of greedy villains, treacherous girlfriends, bungling bankers, and all the other people responsible for injustice."

It was submitted to the High Court by Jerome at the Hotel Denouement to prove that the Baudelaires are innocent.

In the TV series, it was written by Justice Strauss, although Jerome and other sources helped her compile the information in it. 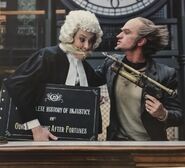 Add a photo to this gallery
Retrieved from "https://snicket.fandom.com/wiki/Odious_Lusting_After_Fortunes?oldid=85060"
Community content is available under CC-BY-SA unless otherwise noted.