Officer Luciana is Esmé Squalor’s disguise during the events of The Vile Village.

After Count Olaf and his troupe arrive in the Village of Fowl Devotees, they presumably kill the old chief of police and Esmé takes over the role, posing as Officer Luciana. She promises to the village to keep them safe, and they all believe her. She later brings in Jacques Snicket (dressed as Count Olaf) and they decide to punish him by burning him at the stake, but he escapes. Count Olaf chases after him and, after Esmé knocks Jacques unconscious with a heavy book, Olaf kills him with a crowbar.

They frame the Baudelaires but they escape and free the Quagmires. After escaping on a fire truck, the Quagmires climb up to Hector’s mobile home, and Officer Luciana uses her harpoon gun in violation of the "no mechanical devices" rule. But when the Quagmires throw down their commonplace books, she shoots at it with a harpoon gun. and destroys them, but she also kills a crow. The village gets angry and annoyed, and she and Detective Dupin escape the village.

In the TV series, her role is mainly similar to the books. She is first seen coming in to the Village Hall to give her weekly report to the Council of Elders. She tells them that the old chief of police resigned because he has 'a sore throat because he swallowed a box of thumbtacks.' She then threatens the Baudelaires, who see through her disguise, by reminding them that they have eyes everywhere and that the Baudelaire orphans are always being watched.

She then brings in 'Count Olaf' (Jacques Snicket who they framed) and tells them that they will burn him at the stake. Later, Detective Dupin frames the Baudelaires for the murder of 'Count Olaf', they are sent to jail and she threatens them with a baton. In the jail, She and Dupin do an interview with Eleanora Poe who also does a photoshoot.

She and Dupin then use mob psychology to make the villagers angry that the children broke out of jail. She uses a harpoon gun to shoot at Hector's Mobile Home. She bursts some of the balloons but when the Baudelaires tell her to stop using a 'Mechanical device'. she accidentally shoots a bird which enrages the villagers but she and Olaf escape in Olaf's car.

Esmé uses several strange names to confuse the villagers but tells them just to call her Officer Luciana. The initials of two of the three names she uses spell "spam". The names are:

Officer Luciana in the Russian cover of The Vile Village. 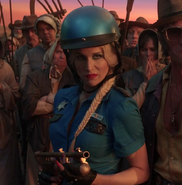 Esmé in her Officer Luciana disguise.

Detective Dupin and Officer Luciana with the angry villagers.