Around the same year as Klaus Baudelaire[1]

Due to ingestion of Medusoid Mycelium[2] (possibly)

About the same as Klaus Baudelaire[2]

Omeros is a young boy living on The Island.

How and when Omeros came to the Island and why he chose to stay is unknown. It is possible that they were born on the Island, as Friday Caliban mentioned that there other children born there, and Omeros is described as about thirteen.[1] His job on the island was to gather wild onions with Finn.

Against Ishmael's suggestion that it was a dangerous activity, Omeros secretly taught Friday Caliban how to skip rocks. Despite this, he seemed to be loyal to the facilitator.

He somehow knew of Bertrand Baudelaire being adopted by orphaned children and named after their father.[2]

While storm-scavenging the day that Violet, Klaus and Sunny Baudelaire wash ashore, Omeros finds a deck of cards and brings them to Ishmael. Ishmael warns that a deck of cards could lead to gambling, and Omeros puts the cards on the sleigh for the sheep to take to the arboretum.

Omeros is among the crowd of islanders who go storm-scavenging the day that Count Olaf and Kit Snicket wash up ashore, with Kit on a raft of books. Omeros is confused by what Olaf is saying- as Olaf claims that he is the king of the island, called Olaf-Land- and says that they need a facilitator to sort this out. Calypso agrees with him, and they leave to fetch Ishmael by putting him on the sleigh, leaving Olaf under the watch of Friday and the Baudelaires.

He is still in the crowd when they return and Omeros takes Olaf's harpoon gun after Weyden and Ms. Marlow wrestle it from him and trap him in a cage. It is revealed the Baudelaires have kept items secretly. Omeros agrees with Friday, Sherman and Professor Fletcher that they should be allowed back if they give up the items, but after they refuse to abandon Kit, Ishmael suggests that the Baudelaires, Olaf, and Kit be banished, and they abandon them on the coastal shelf. It is mentioned that Fletcher and Omeros look particularly regretful as they leave the children.

Ishmael asks him to hide the harpoon gun instead of taking it to the arboretum in case Olaf should escape his cage. When the mutiny breaks out, Omeros remains by Ishmael's chair, "with his hands held suspiciously behind his back," keeping the weapon handy. He watches the mutiny from there, and when Olaf arrives, Ishmael takes the harpoon gun and shoots him; however, this releases the Medusoid Mycelium hidden under his robe, poisoning the islanders. Dr. Kurtz blames Omeros for the poisoning, as he gave the harpoon gun to Ishmael.

It is unknown if he met his fate by being poisoned by the Medusoid Mycelium. It is noted that the Incredibly Deadly Viper followed the boat with an apple, and as the Baudelaires did not know this, it is possible some islanders survived to report this to Lemony Snicket. Friday knew the snake to be friendly, and thus may have taken the apple from it; however, it is unknown if she would have been able to convince Omeros or the drugged islanders to eat it. 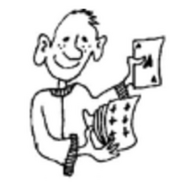 Omeros with his cards in the Russian illustrations.

Skipping rocks with Friday Caliban in the Russian illustrations.