Lemony Snicket Wiki
Register
Don't have an account?
Sign In
Advertisement
in: ASOUE, Cities and towns, FU13SI,
and 10 more

Paltryville is a small, desolate rural town that served as the setting of The Miserable Mill. It holds a reputation of having Lucky Smells Lumbermill headquartered within its city proper, but other than that tidbit, there isn't much activity that one would find enjoyable.

Paltryville rests on the edge of the Finite Forest. It is not listed in any guidebook, due to its small and seemingly near-abandoned nature.

On the one street, there are a few small shops, none of which have any windows. Outside the post office is an old shoe dangling from the top of a flagpole, and across from the post office is the high wooden wall that borders Lucky Smells Lumbermill, with a sign made out of chewed gum. At the end of the street is Dr. Orwell's Optometrist Office.[1]

Alongside the sidewalk were the archives of The Daily Punctilio before their destruction.[2] There used to be a Lucky Smells Melon Farm, which is now gone.[3] Paltryville, as a whole, is quite boring and unpleasant.

While there don't seem to be many people living there, there is a noted population: there is a mayor, and illustrations depict children and a school bus.[1]

In the Netflix adaptation, the town of Paltryville is depicted as being burned down in its entirety with only the Lucky Smells Lumbermill and Dr. Orwell's Office still standing by the time the Baudelaire orphans arrive in the town. As seen in an old V.F.D. photograph, before the fire, the town flourished and had many businesses and restaurants, with the name "Paltryville" being a misnomer.

However, a fire eventually started; while the reason is unknown, The History of Lucky Smells Lumbermill implies Roy Hardwood was the culprit, while The Incomplete History of Secret Organizations implies it was Georgina Orwell. Nevertheless, upon seeing the fire from their picnic spot in the Finite Forest, Bertrand and Beatrice Baudelaire arrived on the scene; Bertrand repurposed a large cowbell, hammer and ten-foot pole to make a fire alarm to warn the townsfolk, while Beatrice redistributed the Lucky Smells water circulation system to put out the blaze. After the fire, the two relocated the survivors, setting them up with good jobs in The City.[4][5]

Following the fire, the town was near-destroyed and abandoned, with Dr. Orwell hypnotizing the remaining citizens to work for coupons at the Lucky Smells Lumbermill, in exchange for Sir claiming that the Baudelaire parents started the fire. Following the unhypnotism and death of Orwell, the lumbermill was put under the control of Charles.[6][7]

Note: This includes information that is from both the books (canon) and the 2017-2019 Netflix Adaptation (which has its own canon). They will be referenced accordingly. 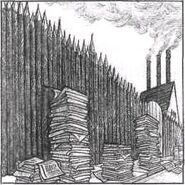 A street by the lumbermill.

The burnt remains of Paltryville.