Poison for Breakfast is a book by Lemony Snicket, released on August 31, 2021. While it distinctly takes place in the V.F.D. Universe, it is unknown where in the timeline it is placed.

For more than twenty years, Lemony Snicket has led millions of young readers through a mysterious world of bewildering questions and unfortunate events. With this latest book--a love letter to readers young and old about the vagaries of real life--longtime fans and new readers alike will experience Snicket's distinctive voice in a new way.

This true story--as true as Lemony Snicket himself--begins with a puzzling note under his door: You had poison for breakfast. Following a winding trail of clues to solve the mystery of his own demise, Snicket takes us on a thought-provoking tour of his predilections: the proper way to prepare an egg, a perplexing idea called "tzimtzum," the sublime pleasure of swimming in open water, and much else.

Poison for Breakfast is a classic-in-the-making that--in the great tradition of modern fables like The Little Prince and The Phantom Tollbooth--will delight readers of all ages.[1]

The book is highly introspective and focuses on Lemony Snicket's philosophies and ideas on life, death, humanity, and everything inbetween. As such, most of the book's content takes place in his mind, and there is little plot, as that is not the focus. Much of the book's content is focused on Snicket's scattered and distracted thought process.

Lemony Snicket has a breakfast of

Tea
with honey
a piece of toast
with cheese,
one sliced pear,
and an egg perfectly prepared,

and thinks about a summer he spent with his family when he was a child at a lake house, in which he secretly fed the geese after learning to prepare his own breakfast, which led to him sneaking out of homes at night quite often. He then finds a note near his door which reads "You had poison for breakfast." After a moment of panic, he numbers his thoughts and eventually decides to investigate his breakfast instead of calling the police or hospital, who may not believe him. He thinks about his own mortality, and what his funeral could be like, and how everyone is a little wicked sometimes.

Snicket sees a man walk away from his house and leaves with intention to follow him. He is distracted by his next-door neighbor, who is reading a good book. He ponders about halfway paradoxes and a Shoemaker of an acquaintance of his as he heads to the tea shop, Incomparable Tea. He then thinks about a film he watched as a child and the store's title, before finding it is closed. Deciding that because it was such a pleasant place the poison would not be there, he then heads to the Beekeeper he buys honey from; while he does not suspect her, he thinks she may have noticed if something was amiss.

Snicket thinks about a story he read as a child "translated" by F.W. Bain from Sanskrit, A Syrup of Bees, and then Korla Pandit, then racial relations between european colonizers and native americans. He reaches the beekeeper, who tells him that she now dislikes that she named her syrup after the story by Bain, as she found out he likely made up the story and did not translate it at all, claiming he did to profit off the sensationalism of people who had never been to India. She tells him that nothing was amiss with her honey or bees, but suggests he investigate the water in his tea.

Snicket then goes to a nearby beach, thinking about his life, and then impulsively dives in. He narrates for a bit about the three rules of writing a book, and then how much he has always loved the water. He then thinks about God and the philosophical idea of tzimtzum. He emerges from the water, shivers, and then goes to the supermarket where he got his bread. He very much dislikes the supermarket, but goes there because of the two bakeries in town, one takes too long to make the bread and the other is very rude. He arrives at the supermarket and thinks about its slogans, and listens to the song playing on the speakers. He then thinks about the amount of ingredients and work goes into making a loaf of bread, before "escaping" the supermarket.

Finding the park to be the least suspicious place, Snicket watches the goats from which his cheese came from, though he finds that both they and their goatherd seem bored. He speculates about a couple on a bench, thinking about how he has a photo of his younger self sitting in front of that bench with someone special, before he trips and lands facedown in the gravel. He decides to remain there for a time, considering how clumsy people often have special views of the world, before a translator helps him up and introduces him to an author. Snicket shares his poisonous predicament with them, and the author tells a story of when he was poisoned by a cactus, only to discover the poison was non-lethal. Snicket then mentions that the tree he had fallen under produced his pears, and then reveals that the entire conversation was imaginary, and he was still laying in the gravel.

Snicket gets up and begins to head to the chicken farm, pondering about the chickens and the eggs. Eventually he decides that because the egg was perfectly prepared (after describing several ways to prepare eggs), it was not poisoned, so he goes to the library. There, he meets with his favorite librarian, who wished to remain nameless and so is referred to as Emily Dickinson. She tells him of a story she read about a composer trapped in a prison camp, which causes Snicket to again think of the Shoemaker, who had a similar past. He goes to his favorite table and pulls one of his favorite books from his pocket. However, as he reads the writing in the margins, he realizes that he himself wrote the note about the poison.

Snicket then describes the fact that when he comes up with ideas for writing, he will often scribble them on whatever paper he has nearby. At an earlier date, after making a young man a poached egg and telling him it wouldn't kill him, the man said that it would because eventually everyone dies. Snicket had written down the poison note for later and it had eventually fallen onto his doorstep. Snicket thinks once more about life and death, and then the process of writing, before recalling a man who stopped to stand by him while he was crying after losing someone important to him. He says goodbye to the librarian and goes home, ready to write a new book of philosophy and to have lunch.

Snicket and his associates reference several books, though usually not by name. According to the Notes in the back of the book, they are supposed to be: 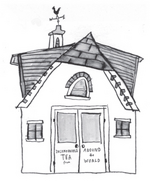 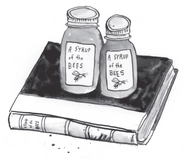 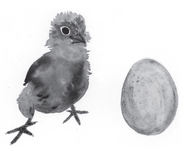