Lemony Snicket Wiki
Register
Don't have an account?
Sign In
Advertisement
in: Pages with inline Wikipedia links, ASOUE, Book characters only,
and 9 more

Weyden: I arrived on a raft of books myself.
Professor Fletcher: But you abandoned them.
Larsen: She did nothing of the sort! You helped her hide them, so you could force those children to read!
Friday Caliban: We wanted to learn to read!
—Chapter Eleven

Professor Fletcher is one of the Islanders who appears in The End.

Finn, calmly and quietly: Do you know the meaning of the word "mutiny"?
Klaus Baudelaire: A mutiny is when a group of people take action against a leader.
Finn: Yes. Professor Fletcher taught me the word.
—The End

At some point in their life prior to arriving on The Island, they became a Professor. When and how they came to the island and why they chose to stay is unknown. Their job, along with Friday Caliban and Robinson, was to do the colony's laundry. They would spend time at the saltwater falls, washing everyone's robes and laying them out to dry in the sun.

After Weyden arrived on a raft of books, Ishmael suggested the library be abandoned, as reading and books would lead to trouble. He also believed that the island's children should not be taught to read for the same reason. However, Professor Fletcher disagreed, and they and Weyden hid her books and held secret classes on the coastal shelf for the children. However, without more books, the kids could only keep in practice by sketching the alphabet in the sand. Fletcher is noted to have taught both Friday and Finn. Larsen somehow discovered this and disagreed with Fletcher, believing that they forced the children to read.

Fletcher seems to be among the group of colonists secretly planning a revolt, as they taught Finn the word "mutiny", held several secrets, and is fixedly on their side during the revolt.[1]

While storm-scavenging the day that Violet, Klaus and Sunny Baudelaire wash ashore, Professor Fletcher finds a chandelier. At Ishmael's suggestion, they discard it. Violet ends up joining them in laundry duties.

Professor Fletcher is among the crowd of islanders who go storm-scavenging the day that Count Olaf and Kit Snicket wash up ashore, with Kit on a raft of books. Fletcher is amazed at the raft, as they have never had a library on the island. The colonists leave to go fetch Ishmael to decide what to do, leaving Olaf under the watch of Friday and the Baudelaires.

They are still in the crowd when they return and it is revealed the Baudelaires have kept items secretly. Fletcher agrees with Friday, Sherman and Omeros that they should be allowed back if they give up the items, but after they refuse to abandon Kit, Ishmael suggests that the Baudelaires, Olaf, and Kit be banished, and they abandon them on the coastal shelf. It is mentioned that Fletcher and Omeros look particularly regretful as they leave the children.

When the mutiny happens, Professor Fletcher is seen shouting at Ariel. They argue that they are tired of drinking cordial and listening to Ishmael's suggestions. Larsen reveals that Fletcher and Weyden hid books and taught children to read, and Fletcher angrily suggests that they proceed to abandon Ishmael and his supporters.

The mutiny dissolves into chaos until the arrival of Count Olaf. Ishmael stands and shoots Olaf with a harpoon gun, which releases the Medusoid Mycelium hidden under his robe. As everyone argues with one another who is to blame, Fletcher claims that they're all to blame for putting Olaf in a cage, which made him threaten them all.

Ishmael suggests the islanders drink cordial to try and dilute the poison, and the fermented cordial drugs them into compliance. He convinces them that the Baudelaires are the root of the trouble, and then gathers them on the outrigger and has them sail off towards Lousy Lane for a cure, though they will not make it in time to save their lives. The Baudelaires attempt to help them, bringing the cure in bitter apples, but Fletcher, drugged into obeying Ishmael again, claims the island was safe until the children arrived.

It is unknown if they met their fate by being poisoned by the Medusoid Mycelium. It is noted that the Incredibly Deadly Viper followed the boat with an apple, and as the Baudelaires did not know this, it is possible some islanders survived to report this to Lemony Snicket. Friday knew the snake to be friendly, and thus may have taken the apple from it; however, it is unknown if she would have been able to convince Professor Fletcher or the drugged islanders to eat it. 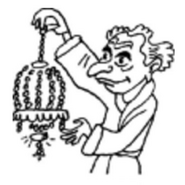 With a chandelier in the Russian illustrations. 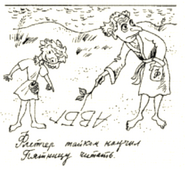 Teaching Friday Caliban to write in the Russian illustrations.