The Ringmaster is Count Olaf’s disguise that he uses at Caligari Carnival in the TV series only, as the book never explicitly stated that he was in disguise.

It is not really a disguise, but more of a costume. As everyone thinks Count Olaf is dead, he doesn't really need to go into a serious disguise with a fake voice.

He also says his name is "Count Olaf, but not the same Count Olaf who is wanted for an assortment of crimes." Mr Poe remarks that there are so many Count Olafs.

He is a ringmaster at Caligari Carnival. The top hat conceals his unibrow, and the long trousers and high boots cover his tattoo, but because everyone thinks that he is dead, it doesn’t really matter. 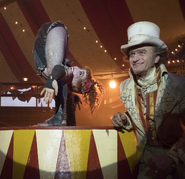