The S. S. Prospero is a V.F.D. ship that departs from Daedalus Dock at eight o'clock per voyage, with exceptions of emergencies.

The Prospero supposedly used to be called the Pericles.[2] The boat was used as a method of emergency travel for VFD, both for escape and likely as part of recruitment, specifically for the part where the new children are scattered across the globe until the authorities stop searching for them. It appears to be owned by an elderly couple.

Despite being a V.F.D. ship, if there are no emergencies required by volunteers, the ship maintains a schedule and accepts non-volunteering passengers. It is implied that "enemies" of V.F.D. may also board the ship, as Lemony Snicket is warned that enemies of his and the captain will be disguised as passengers and/or seagulls. However, it is possible that Snicket, having been accused of arson, was running from both sides of V.F.D. at the time.

Once again, assuming there are no emergencies, the ship departs promptly at eight o'clock sharp, and only from Daedalus Dock.

One account of an emergency departure was when Snicket was to escape the country. It is noted to have departed over three hours early, shortly before five o'clock. Any passengers not aboard were left stranded, and a passenger who wished only to be identified as E. (possibly Esmé Squalor) exclaimed she did not intend to swim. An "enemy" of Snicket on the Black Rapids deck reportedly attempted to explain to those on land why the ship was leaving early, but the only sounds audible over the sound of the ship were "Phase Two" and "Drat!"[1]

Monty Montgomery planned to take Violet, Klaus and Sunny Baudelaire to Peru; though it is unconfirmed, it is often speculated that this was in an attempt to send them across the globe for a V.F.D. recruitment.[3] After Montgomery's death, the couple who owned the ship managed to sneak the Incredibly Deadly Viper aboard.

Snicket once again boarded the ship after reading news of his death in The Daily Punctilio.[1]

The ship is known to be captained by a J.S., most likely Julio Sham, meaning that any Volunteer with a disguise kit could take up the captain position.

At the time Snicket escaped the country, the crew was:[1]

The ticket to the Prospero is long and rectangular, decorated with two dolphins wrapped around the textbox. It reads:

Every Ship Has Its Own Fun!
All voyages aboard
The Prospero
depart from Daedalus Dock at
eight o'clock sharp.
Please arrive on time.
Latecomers will be forced to swim.

The part of the ticket beneath the ripping line reads: This portion of the boarding pass should be retained as evidence of your journey. Underneath three dots, a Spanish translation of the sentence is read.

Along the border is a poem:

Our latch string is hanging out
For true friends, old and new
You're welcome here, so come inside,
We've saved a place for you.

In order to board the ship, it is to be handed to the man collecting tickets at the front gate.[1]

There is a second, encoded ticket, for volunteers in crisis to give to the captain to alert them that they must depart as soon as possible. It should be traded the Main Bridge.

While the second ticket is remarkably similar, the center text reads:

Every Ship Has Its Own Schedule.
All V.F.D. voyages aboard
The Prospero
depart from Daedalus Dock whenever
circumstances require.
Please arrive on time.
Latecomers will be forced to swim.

As well as this, the border poem is different- instead, it is replaced by the final verse from "The Little Snicket Lad":[1]

When we drive away in secret,
You'll be a volunteer,
So don't scream when we take you:
The world is quiet here.

As a blueprint of the Prospero was released to the public in the unauthorized autobiography of Lemony Snicket, its design is known.

According to the diagram, the Ballroom is the lowest floor of the ship. The second floor houses the Typee Shuffleboard Court and Black Rapids Deck, and the first contains the Black Guinea Deck, the Ringman Deck and the White Jacket Lounge.

The Front Gate is where tickets are collected. In order to reach the Main Bridge in order to speak to the captain, one must walk through the White Jacket Lounge, the Redburn Ballroom, and the Typee Shuffleboard Court.

It is warned that enemies of V.F.D. are stationed in the Ringman Deck, the Black Guinea Deck, and the Black Rapids Deck.[1]

Blueprints of the Prospero. 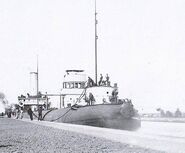 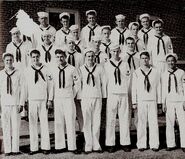 The sailors of the Prospero.

The ticket to the Prospero.

The V.F.D. ticket to the Prospero.