Shirley is Count Olaf as Dr. Georgina Orwell's receptionist in The Miserable Mill.

Shirley teams up with Dr. Georgina Orwell in order to hypnotize Klaus Baudelaire and make the owner of the Lucky Smells Lumbermill, Sir, believe that the Baudelaires are up to no good.

Klaus is successfully hypnotized, and his plights give Sir the choice to either fire them and give them to Shirley, or keep them as workers in the lumber industry.

Shirley then gives The Bald Man with the Long Nose in the alias of Foreman Flacutono the task of trying to saw Sir's assistant, Charles, in half so that the Baudelaires will finally be in "her" clutches. But the Baudelaires save the day, defeating Shirley's plans. Dr. Orwell is killed when she steps in the path of the whirring saw.

Shirley and Flacutono are locked in the library and monitored by Phil. Sir claims that Shirley being Count Olaf is so unbelievable as he met this young woman who isn't at all like Count Olaf. Sir says Shirley has one eyebrow instead of two, but plenty of wonderful people have that characteristic. Shirley defends "herself", claiming "she" was hypnotized along with the foreman. When Mr. Poe asks to see Shirley's left ankle, Shirley claims it's impolite to look at a woman's legs, but does so anyway. Count Olaf stops pretending to be Shirley and escapes by jumping out the window with the Bald Man with the Long Nose.

Shirley's role is quite similar, but the children meet "her" earlier because "she" and Dr. Orwell come to visit Sir to talk about adopting the Baudelaires. Shirley helps Dr. Orwell hypnotise Klaus but goes looking when "she" hears a noise (Violet and Sunny). They escape.

Later, Shirley and Orwell go and see how the “accident” is going to plan. Klaus is about to cut Charles with the saw, but when Violet shouts inordinate, it breaks the spell. They then have a fight, but when Orwell steps into the furnace, she is incinerated. Shirley then runs away with "her" associates.

Shirley wears three different outfits. She has a wig on, wears glasses and has red lipstick. She also wears earrings. First, she wears a pink top with a red and yellow skirt and high heels, holding a box of cookies. Then, she wears a brown top when speaking to Sir about adopting the children. Finally, she wears a red dress when seeing the accident.

"As the first season went on, I was dealing more with the script than the books, so when the script said [he breaks into a '40's rat-a-tat-tat]: "My name is Shirley St. Ives. It says so on my nametag. See?", the language had its own characterisation" - Neil Patrick Harris on Shirley St. Ives. 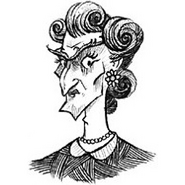 Shirley in the Chinese version 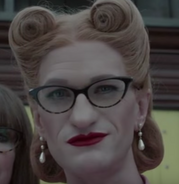 Shirley in the TV Series.

Shirley, Sir and Dr. Orwell being cycled by Charles. 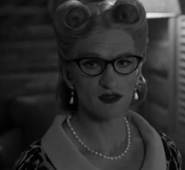 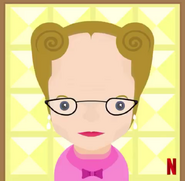