Start a Wiki
<< When Did You See Her Last? | Shouldn't You Be in School? | Why Is This Night Different from All Other Nights? >>

Shouldn't You Be in School? was released September 30, 2014, and is the third of four books in Lemony Snicket's All the Wrong Questions series.

Is Lemony Snicket a detective or a smoke detector? Do you smell smoke? Young apprentice Lemony Snicket is investigating a case of arson but soon finds himself enveloped in the ever-increasing mystery that haunts the town of Stain'd-by-the-Sea. Who is setting the fires? What secrets are hidden in the Department of Education? Why are so many schoolchildren in danger? Is it all the work of the notorious villain Hangfire? How could you even ask that? What kind of education have you had?

Maybe you should be in school?

S. Theodora Markson and her apprentice Lemony Snicket are hired to investigate a case of arson. Sharon Haines, an employee of the Department of Education informs Snicket of the fire, and becomes friends with Theodora. Sharon's son, Kellar, acts suspiciously around Lemony. There is a witness to the arson, but when they go to visit his house, they discover it has also been burned down. Dashiell Qwerty, the town's librarian, is arrested for burning down the buildings, although Snicket highly doubts it was Qwerty that committed the crimes. It is revealed that Qwerty is arrested after Theodora and Sharon inform the Mitchum Officers that he is guilty.

Stain'd Secondary School is then burned down, and all the schoolchildren are moved to the previously disused Wade Academy. Two people from the Department of Truancy come to take Snicket's friends (Jake Hix, Cleo Knight and Moxie Mallahan) plus Kellar Haines to the boarding school, although Snicket is not taken. The man destroys Moxie's typewriter. Lemony realizes that the two people were Sharon and Hangfire.

When Lemony returns to The Lost Arms he finds Theodora beaten. She reveals that Sharon attacked her. Lemony finds Pip and Squeak hiding from the Department of Truancy. He goes to the school to investigate and is knocked unconscious; he wakes up in Ellington Feint's room in the school. She pretends to be a student called Filene N. Gottlin. Lemony and Ellington meet with Moxie, Jake, Cleo, Kellar and Ornette Lost (Prosper Lost's daughter) in the school library, though all the books are blank. It is revealed by Kellar that he and his mother aided Hangfire in order to save his sister, Lizzie. Snicket comes up with a fragmentary plot and his friends all help to carry it out. Stew Mitchum and Hangfire warn Lemony that they will kill him if necessary before beating him up.

Hangfire, the villain behind the arsons, attempts to mislead Snicket into thinking Dicey's Department Store is being burned down, but Snicket works out that he is planning to burn down the library. He removes the books before Hangfire can burn it down, although the building ends up being saved by the recently installed sprinkler system. Stew confronts Lemony and Ellington at the library, leading to Ellington being arrested for the destruction of the books. Lemony replaced the full books with the empty ones found at the school library. He then hides the full books at Black Cat Coffee. A younger Josephine Anwhistle then talks to Lemony about how his sister, Kit, was arrested.

The Wind in the Willows, Kenneth Grahame 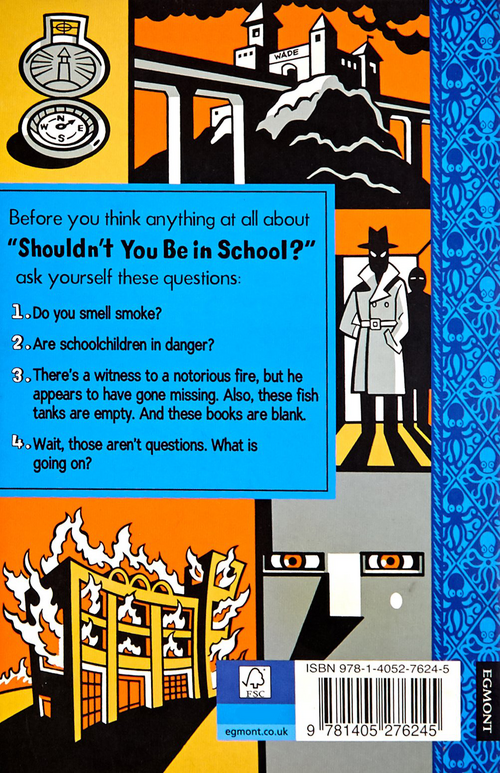 Retrieved from "https://snicket.fandom.com/wiki/Shouldn%27t_You_Be_in_School%3F?oldid=44586"
Community content is available under CC-BY-SA unless otherwise noted.