Sir is a money-hungry businessman who was the fourth guardian of the Baudelaire orphans and the owner of the Lucky Smells Lumbermill in Paltryville. His first appearance was in The Miserable Mill.

Sir's "partner" and implied lover is Charles, whose duties involve ironing Sir's shirts, cooking him omelettes, and making him milkshakes. In other words, Charles is employed as his personal servant.

Sir is the dominant one in his partnership with Charles. He is often rude to Charles, including ignoring Charles's concerns and treating his opinions as worthless, and he raises his voice at him.

Sir is the type of person who thinks that raising his voice and saying "my word is final, this argument is over" means he "wins" an argument, as if he has the ultimate authority. Because of Charles submissive personality, Sir's behavior in debates works, and he always gets the last word.

Despite their unhealthy relationship, it is implied that Sir is not entirely evil and that he cares about Charles to some degree, which is why Charles stays with him. Charles hopes he can change Sir, as he sees that little bit of kindness in him. Charles mentions Sir had an unfortunate childhood, and Charles is sympathetic toward him.

It is implied that Charles and Sir may be a gay couple. In the TV series, Charles mentions he struck up the courage to leave Sir and found another man (Jerome Squalor).

Sir is also greedy and indifferent to others. He does not care much about the welfare and horrid living conditions of his employees, especially the Baudelaire children, and mentions he has not even visited the dormitory in six years, and hires relatives to work in his dismal conditions.

He had a very terrible childhood which caused him to be the greedy, mean-spirited boss he is today, but it's unknown what exactly happened to him that shaped his character. In his adulthood, Sir eventually became the owner of the Lucky Smells Lumbermill.

He shows little concern for both the Baudelaire orphans and his employees. The latter whom he pays in coupons and provides an unsatisfying meal of chewing gum for lunch and disgusting casseroles for dinner.

Sir's real name is unknown. It is extremely difficult to pronounce, as evidenced by Mr. Poe's attempts early in the book. Equally obscure is Sir's appearance because his entire head is hidden by a thick layer of smoke from his ever-burning cigar.

In the book, it is left ambiguous that he may have conspired with Georgina Orwell. In the TV series, it is revealed they have indeed conspired with each other because he gets free labor and they split the profits, however, Sir simply thinks that Orwell simply does "weekly eye exams to boost worker morale" instead of hypnotism. It is possible he is a member of V.F.D., but he probably could be on the fire starting side.

At the end of the fourth book when Shirley's identity is exposed and Charles's life was saved, he fires the Baudelaire children, claiming that they were too much trouble and that misfortune follows them wherever they go and he will have no more of it. Charles objected to Sir's decision, but as usual, he caves in when the latter put his foot down.

In the TV series canon, a worker's revolt causes Sir to flee from the lumbermill instead of staying like in the book. Sir also 'frees' Klaus by accident from his hypnosis.

He later appears in The Penultimate Peril as a guest at Hotel Denouement. A disguised Klaus takes him and Charles to the sauna. While the latter tells the former that he wants to apologize to Klaus and his sisters for what happened at the mill, they both talk about a cocktail party held by someone named J.S. In addition, Sir stated that wood from his lumbermill was used to build the Hotel Denouement. Frank Denouement or Ernest Denouement comes in telling the two of them that they have to clear the sauna. When Sir stated his love for burning wood, Frank or Ernest asks a passing chemist (who was actually Colette in disguise) to take them to Room 547 where Organic Chemistry is.

Sir was among those awoken by the death of Dewey Denouement by an accidental shooting from a harpoon gun. He remembered the Baudelaire children clearly after they were identified by Geraldine Julienne and claimed once again that they instigated accidents at the Lucky Smells Lumbermill while Charles corrected him by stating that Count Olaf was responsible for those accidents.

During the trial that had taken place the next day, Sir submitted the employment records as evidence.

When the Hotel Denouement Fire began, he and Charles were holding hands in order to not lose each other in the commotion as they argued about whether fires were good for the lumber business or not. It is unknown if both of them survived, or if they died together as partners until the end. 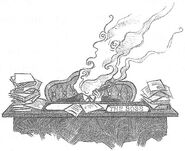 Sir at his desk.

Sir on the cover of his book.

Sir listening to Orwell and Shirley.

Sir speaking to Violet and Charles.

Sir (right) and his "partner" Charles. 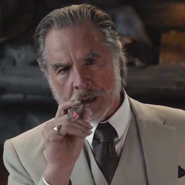