Special Orphan Running Exercises (S.O.R.E. for short) is part of one of Count Olaf's many schemes to steal the Baudelaire fortune. Disguised as Coach Genghis, Olaf forces the Baudelaires to run hundreds of laps all night.

Coach Genghis claims to Vice Principal Nero that orphans have the best legs for running so he has comprised S.O.R.E. These mandatory exercises take place nightly during Nero's mandatory violin recitals.

To combat S.O.R.E., Isadora and Duncan Quagmire offer to help the Baudelaires by disguising as them with their clothing, using a bag of flour for Sunny, as Coach Genghis got into the habit of watching them from afar. The plan fails when Genghis kicks Sunny, putting a hole into the flour bag.

At the end of the novel, the Baudelaire's S.O.R.E. training helps them to catch up to a fleeing Coach Genghis, although only to the point where they can reveal his identity as Count Olaf.

The Baudelaires running hundreds of laps. 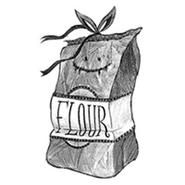 A bag of flour as Sunny.

Add a photo to this gallery
Retrieved from "https://snicket.fandom.com/wiki/Special_Orphans_Running_Exercises?oldid=84396"
Community content is available under CC-BY-SA unless otherwise noted.