Spyglasses are a tool used by V.F.D. in both the film and TV series adaptations of A Series of Unfortunate Events.

In the novels, a spyglass used by V.F.D. is only briefly mentioned in The Slippery Slope.

In the film, they are used as a means of hinting at the secret unnamed organization (i.e. V.F.D.), and of Uncle Monty's membership, and the Baudelaires receive a spyglass from their parents as a "rite of passage" according to Lemony Snicket.

In the TV series, the spyglasses return and are given a more explicit purpose, to decode secret messages between V.F.D. members and keep a lookout in general. The spyglasses also function as a way for Volunteers to identify each other that is not as permanent a tattoo.[1] The in-universe book The Incomplete History of Secret Organizations reveals that each spyglass is "tailored to the individual using [it]". Whether this means every spyglass is unique or simply that certain combinations are 'unlocked' in certain spyglasses is unknown.

It is also shown that, with specific arrangements of the code dials, the spyglasses can function as a flashlight, code-breaker, and a fire-starter. It is also revealed that these versions of the spyglasses are capable of producing a beam of concentrated heat. This is likely the cause of the Baudelaire and Quagmire Fires, but the identity of by whom used it is still unknown.

The Baudelaires recover one half of a spyglass from their destroyed home, and they encounter the Quagmire triplets who possess the other half of a complete spyglass. They combine their spyglasses, which the Baudelaires seem to lose when their basket explodes in "The Ersatz Elevator: Part Two."

In the starting of the Quagmire Fire scene in The Miserable Mill: Part Two, a person is seen in their car, with a spyglass on the dashboard. It is possible that the spyglass shot the laser that started the fire. Due to the convergence of light, it could very well be possible for a laser to be shot through the spyglass to make a fire starting beam. In The Incomplete History of Secret Organizations, there is a passage named "Starting Fires: Using The Sun And a Spyglass by Josephine Anwhistle."[4] When Violet Baudelaire uses the laser built into the spyglass,[3] it looks fairly familiar to the laser referred to earlier.

There are approximately 2,016,125 potential combinations to the spyglass.[1] Some known functions that the combinations can unlock are:

The spyglasses in the film are seemingly made of solid brass, but in the TV series, the spyglasses seem to be made of wood with rotating rings on one half, seemingly used for certain settings or different codes, and navigational compasses or gauges on the other half. The draw-tubes that pull out are made of solid brass with some rotating wheels and numbers, and the top of the spyglass has a cap bearing the V.F.D. insignia. Though the creator of the spyglasses is unknown, a common candidate would probably be Gustav Sebald, as he is known for creating the Sebald Code, which was featured in the film Zombies In The Snow, which Uncle Monty used a spyglass to decode a message hidden within the subtitles of the movie in the TV series.

Some known owners of V.F.D. spyglasses (in the Netflix series) are: 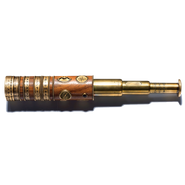 Deciphering Code: Using the Dials of the Spyglass.

Spyglass page in The Incomplete History of Secret Organizations

Cutaway view of a Spyglass model.

The spyglass in The Incomplete History of Secret Organizations.