Lemony Snicket Wiki
Register
Don't have an account?
Sign In
Advertisement
in: 29 Myths on the Swinster Pharmacy, ATWQ, FU13SI,
and 5 more

Before File Under: 13 Suspicious Incidents

Owner(?) of the Swinster Pharmacy[2]

The owner of the Swinster Pharmacy is a very tall man only seen very briefly.

While the Swinster Pharmacy is under investigation, the sixteenth myth claims that the owner is "completely insane" and quite tall, and that while nobody ever sees him arrive at the building, everyone sees him leave- though the investigators are not entirely sure he is the owner. He is presumably the "he" who will not tell the newspapers what they sell.[2]

The Pharmacist once encountered a young Lemony Snicket, who was looking for a postcard left behind by previous customer Lois Dressing. The owner was mostly preoccupied with things that were "ill," also explaining that he received no calls from Dressing as the phone was ill. He manages to recall that she asked directions to Stain'd Station before looking at her book and hurrying out the door in the opposite direction. All he remembered about the book was the cover, which he mistook for a virus or bacteria.[1]

The owner is extremely tall, to the point where Snicket at first mistook his legs for tubes of wrapping paper, and his head touched the light fixture. He is "as tall as three tall things stacked on top of each other," with a white, faintly vertically-striped jacket. His face is described as pale and old.[1] 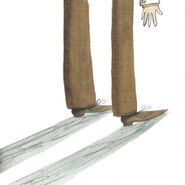