Tatiana Cozy is a young woman who lives in an apartment above Cozy's in Stain'd-by-the-Sea. She appears in File Under: 13 Suspicious Incidents, in the ninth incident, "Midnight Demon."

Tatiana lived in Stain'd-by-the-Sea with her mother, Thomasina, father, and twin brother, Treacle. The family lived in a cramped apartment above the rocking chair store, Cozy's, with their dog, Tabitha. Tatiana's father died sometime before File Under: 13 Suspicious Incidents, due to choking on a fishbone, though Thomasina blamed the "stationary chair" he was seated in.

Tatiana and Treacle were given a good education and were gifted with sound business sense and an appreciation for hard work, though their mother believed that they would be helpless without her, and didn't listen to their suggestions to better the store, which was running out of business during Stain'd-by-the-Sea's economic crash.

Treacle Cozy: You don't have to worry. My sister and I are hard workers with a good education and sound business sense.
Tatiana Cozy: It's unlikely we'll end up living on the streets.
Thomasina Cozy: Children think they know everything, don't you agree, Mr. Snicket?
Tatiana Cozy: Mother, Mr. Snicket is a child.
—Midnight Demon

Thomasina decides that, to ensure her children don't end up on the streets when she dies, and against Tatiana's wishes, that her daughter should marry Baron von Pendle, the nephew of the inventor of the swingset and a rich man. Though the Baron is nice enough, Tatiana does not feel that they have enough in common to be married, and hoping that her mother will let her and Treacle run the store, Tatiana and Treacle plan to break up the engagement.

As Baron von Pendle is an insomniac, and does not want to marry another insomniac, Treacle disguises himself as his sister with a long coat and wig and walks along the Gobi Pier, within the Baron's sightline, to try and convince the Baron that Tatiana is unable to sleep; meanwhile, when Thomasina's attention is brought to this, Tatiana is at home asleep, so that her suspicions are not aroused. However, Thomasina becomes convinced that the upcoming marriage is being tampered with by a demon, and calls Lemony Snicket to investigate after nine nights of "Tatiana"'s appearance on the pier.

Snicket meets the twins, after Thomasina interrupts them discussing what else they could sell at Cozy's, and Thomasina explains her plight. Snicket agrees to help, and asks that Tatiana take a walk with him at 11:00 that night. Tatiana and Treacle then make a plan to throw Snicket off.

On the chilly and misty night, Tatiana puts on a long coat and woolen cap and leaves with Snicket to walk down the piers that had once been at the edge of the sea. Snicket accuses Tatiana of trying to trick her way out of the marriage and sneaking out to walk along Gobi Pier in hopes that the Baron will cancel the wedding. Tatiana denies this, and they wait behind a deteriorating fishing shack to spot the figure, though Snicket doubts it will appear, as Tatiana is with him. Snicket provides an alternative explanation, that the Baron is making things up so he can live as a bachelor, but Tatiana thinks he's eager to marry her, though she doesn't want to and was hoping to convince her mother to let her and Treacle run the business.

At that moment, Treacle arrives, disguised as his sister, and Tatiana pretends to panic, running away and crumpling to the ground, which causes Snicket to chase after her. Snicket guesses that the figure might be Treacle in disguise, but Tatiana reminds Snicket that Treacle's hair is shorter and that he was reading at home. They return to Cozy's, and see Treacle sitting in a rocking chair and reading.

When Treacle tells Snicket the name of their dog, the boy summons her, which reveals the twins' ruse- Treacle hid his wig underneath the dog. He asks if it would be easier to just tell the Baron and Thomasina that they don't want to marry, and the twins say that wouldn't be as fun. After a conversation with Snicket over tea, the twins agreed to get Tatiana out of her marriage through calm conversation rather than tricks with demons.

Tatiana is a young woman with long, bushy hair and eyeglasses. She is described as being nearly identical to her twin brother, Treacle.

Thomasina Cozy: The twins are all I have since their father died in a stationary chair accident.
Tatiana Cozy: Our father died choking on a fish bone. He just happened to be sitting at the time.
—Midnight Demon

Lemony Snicket: You're very good liars. That might come in handy if you really want to sell people photographs of kittens. But wouldn't it be easier just to tell your mother and the Baron that you don't want to get married?
Treacle Cozy: Easier, but not as much fun. Did you suspect?
Tatiana Cozy: Of course he suspected, but he didn't know for sure until you told him the name of the dog.
—Midnight Demon 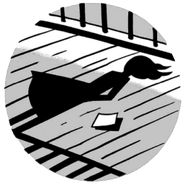