Duncan and Isadora Quagmire being kidnapped into Count Olaf's car; a salmon bumper sticker foreshadows the next book

You may be looking for The Austere Academy: Part One or Part Two.

The Austere Academy is the fifth book in A Series of Unfortunate Events, written by Lemony Snicket (Daniel Handler).

The book was later adapted into the TV series produced by Netflix as the first and second episodes of season 2.

In this book, the Baudelaires are sent to a depressing (and distressing) boarding school.

If you were looking for a story about cheerful youngsters spending a jolly time at boarding school, look elsewhere. Violet, Klaus, and Sunny Baudelaire are intelligent and resourceful children, and you might expect that they would do very well at school. Don't. For the Baudelaires, school turns out to be another miserable episode in their unlucky lives.

Truth be told, within the chapters that make up this dreadful story, the children will face snapping crabs, strict punishments, dripping fungus, comprehensive exams, violin recitals, S.O.R.E., and the metric system.

It is my solemn duty to stay up all night researching and writing the history of these three hapless youngsters, but you may be more comfortable getting a good night's sleep, in this case, you should probably choose some other book.

For Beatrice,
You will always be in my heart,
in my mind,
and in your grave.

Violet, Klaus, and Sunny are sent to a depressing and stressful boarding school called Prufrock Preparatory School. The buildings and classrooms resemble gravestones and their motto is "Memento Mori", a Latin phrase which means "remember you will die".

The Baudelaires meet Vice Principal Nero, who is quickly revealed to be pedantic, cruel and mocking towards them. Nero claims that an advanced computer system will keep Count Olaf away. He also reveals that without a letter from their parents or a guardian giving them permission to live in the dormitories, they are forced to live in the "Orphans Shack". The shack is small and disgusting, painted green and decorated with pink hearts to humiliate them, has vicious crabs and an odd tan fungus dripping from the ceiling. Nero refuses to make an exception for the Baudelaires to live in the dormitory where each student has a bowl of fresh fruit every Wednesday because Mr. Poe is technically not their guardian.

The Baudelaires are forced to deal with several bad situations, such as their horrible living space, Nero's mandatory six-hour violin recitals and condescending behavior, and nasty children. Most notably, there is a rude and violent girl named Carmelita Spats who bullies the Baudelaires for being orphans and having to live in a shack. Sunny is too young to attend school so she is forced to serve as the school's secretary. Violet's teacher is Mr. Remora who tells long and boring stories along with having an obsession with eating bananas, while Klaus' teacher is Mrs. Bass, a woman who is addicted to measuring objects.

The Baudelaires meet and befriend two other orphans, Isadora and Duncan Quagmire, after being defended by them from Carmelita during one of her bullying sessions. Isadora and Duncan are actually two members of a set of triplets. Their brother Quigley died in the same fire that killed their parents. The Quagmire children keep notebooks on hand, as an aspiring journalist Duncan likes to write down facts and aspiring poet Isadora likes to write in couplets. When the Baudelaires share their misfortunes with the triplets, the two reveal that they, too, stand to inherit a fortune, through the Quagmire Sapphires.

Count Olaf, disguised as "Coach Genghis," shows up and fills a role as the new gym coach. The Baudelaires wish for Genghis to take off his turban to reveal his unibrow, but Nero allows him to keep it on due to "religious reasons" and does not wish for Nero to violate his religious beliefs. To hide his eye tattoo, Genghis also refuses to remove his shoes because he claims his feet smell, although this might not be a lie as Count Olaf has poor hygiene. Violet convinces her siblings to pretend not to recognize Olaf due to the reasoning that Olaf would just get his way with Nero. Violet says they could use their time to find out what Olaf is up to, and to see if his assistants are nearby.

Olaf forces the Baudelaires to run laps almost every night for S.O.R.E. (Special Orphan Running Exercises) due to the vague and nonsensical reason that "orphans have the best legs for running" and is extremely nasty. As a result of S.O.R.E., the Baudelaires begin sleeping in class and failing their classes due to exhaustion. Nero informs them that if Violet and Klaus don't pass comprehensive tests and if Sunny is unable to staple with homemade staples, they will be expelled from school. He tells them that Coach Genghis is willing to homeschool them.

The Quagmires devise a plan to help the Baudelaires: Isadora will dress like Violet, Duncan will dress like Klaus, and a bag of flour will take Sunny's place during S.O.R.E. Meanwhile, the older Baudelaires can study from the Quagmire notebooks while creating staples for Sunny. Violet and Klaus pass their tests and Sunny staples satisfactorily but Genghis comes and says the Quagmires were impersonating the Baudelaires during S.O.R.E. which is the same as cheating. Nero gleefully expels them.

Poe arrives and is disappointed to hear the Baudelaires are cheating. Despite getting into an argument with Mr. Poe, Nero refuses to let the children stay at the school. Poe asks Genghis to remove his running shoes for the Baudelaires, causing Count Olaf to flee. The Baudelaires, having trained in routine running, chase after Olaf remarkably well. Violet manages to take off his turban revealing the unibrow. Sunny manages to untie his shoes, revealing the tattoo.

Meanwhile, Isadora and Duncan are being kidnapped by the white-faced women and are smuggled into a nearby car. Isadora screams for Klaus' help, but one of the women bites Klaus' hand and shuts the car door. Before the car drives away, the Quagmires try to tell the Baudelaires about something called "V.F.D."

Lemony Snicket mentions that Count Olaf would eventually force the Quagmires into puppy costumes so he could sneak them onto an airplane without anyone noticing. The book ends with the Baudelaires weeping for their abducted friends while the adults argue.

In the last picture of The Austere Academy, Duncan and Isadora can be seen frantically waving through the back window of Count Olaf's car. On the bumper is a sticker depicting a salmon, which refers to Café Salmonella.

Please excuse this ridiculously fancy stationary. I am writing to you from 667 Dark Avenue, and this is the only paper available in the neighborhood. My investigation of the Baudelaire orphans' stay in this wealthy and woeful place is finally complete–I only pray that the manuscript will reach you.

Not next Tuesday, but the Tuesday after that, purchase a first-class, one-way ticket on the second-to-last train out of the city. Instead of boarding the train, wait until it departs and climb down to the tracks to retrieve the complete summary of my investigation, entitled THE ERSATZ ELEVATOR, as well as one of Jerome's neckties, a small photograph of Veblen Hall, a bottle of parsley soda, and the doorman's coat, so that Mr. Helquist can properly illustrate this terrible chapter in the Baudelaires' lives.

References to the real world

Primary Image: Carmelita Spats with the Memento Mori archway in the background. 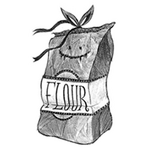 Sunny sleeping on the salad in the cafeteria.

Final image: The Quagmires being abducted by Count Olaf into his car. Note the salmon on the car bumper, a hint to the next book. 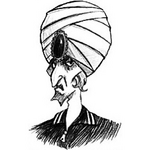 Coach Genghis from The Complete Wreck.

This edition has the same content as in the original one. The main difference here is the cover, which is black, has different fonts and a forest green spine. Brett Helquist's illustration is also different. It shows Carmelita glaring at the children as they look for somewhere to sit. Beside her is a boy forced to eat without cutlery, one of Nero's punishments. The book is published by Egmont. On each of the UK versions, between the coloured spine and the black cover, there are narrow images depicting a reference to the content of each book. The Austere Academy features a long, curling tape measure. This is repeated on the back cover.

This is a paperback version of The Austere Academy released in the UK by Egmont Books in 2010. It has Lemony Snicket written on the top with A Series of Unfortunate Events written below it in an eye shape.

The Austere Academy Or, Kidnapping!

The Austere Academy Or, Kidnapping! is an unreleased paperback re-release of The Austere Academy, designed to mimic Victorian penny dreadfuls. It originally had a release date of April 1, 2008, but was never published. It is unknown whether it will be released in the future. [1]

This French edition, published by Nathan Poche has a very different cover, Brett Helquist's illustration is not seen here, apart for a portrait of the Baudelaires. It is almost entirely black, with a white illustration of a violin or perhaps a cello.