While the Quagmires keep up the search, the Baudelaires struggle to balance their studies with a punishing workout schedule, courtesy of Count Olaf.

Count Olaf, disguised as Coach Genghis, is the new coach at Prufrock Preparatory School. The Baudelaires try to reveal his identity but nobody believes them. To keep them occupied, Olaf assigns the Baudelaires a special exercise that they must perform at sunset, known as S.O.R.E. Their special exercise is to run around in circles with paint until they create a luminous circle. Vice Principal Nero states that this will not exempt them from his violin recital so they will be owing him bags of candy.

The Quagmires try to help the Baudelaires by going to see the librarian but she hasn't had any luck finding the book. They run night after night which leads to them doing poorly in their classes. The Baudelaires are called into Vice Principal Nero's office and are reprimanded because of this. Olaf suggests that they are homeschooled by him. Nero agrees that if the Baudelaires don't pass their exams tomorrow then they will be homeschooled. He also reminds them that the S.O.R.E. exams will not exempt them from his next violin recitals and that they will owe him bags of candy.

There they find the missing book and look through it to learn more about secret organizations and their spyglass. Unfortunately, one of Olaf's minions finds them in the library and they are kidnapped.

Arthur Poe shows up to come and check on the Baudelaires while also bringing the bags of candy that they owe to Nero. He tells them that he's brought paperwork for their homeschooling just in case they fail. They try to tell him about Count Olaf but he believes that the computer system would've recognized him. The Baudelaires are called to the stage in the auditorium to be tested.

The librarian leaves disgusted by what's happening. She heads to the library but finds that it's been ransacked. She sees on the floor the book that the kids have been looking for. The Baudelaires manage to pass their test held by Nero, Mr. Remora, and Mrs. Bass. Nero allows them to stay for the remaining trimester. Suddenly, Olaf says that he must also endure a gym teacher evaluation. He challenges them to an arm wrestling match. He takes on both Violet and Klaus at the same time. They win with the help of Sunny. Poe realizes that it is Count Olaf after Sunny reveals his tattoo on his ankle by taking off his shoe.

Olaf runs away but the Baudelaires give chase. He manages to escape but takes the Quagmires with him. Isadora tries to tell them about V.F.D but ends up knocking their half of the spyglass to the ground. The Baudelaires watch as Olaf escapes once again.

Jacques saving Larry in the freezer. 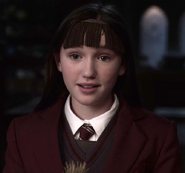 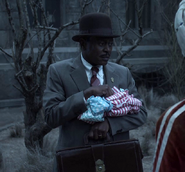 "Because that's what friends are for."