See Carmelita (disambiguation) for other uses.

The Carmelita is an octopus shaped submarine stolen by Count Olaf.

The Carmelita was also one of the three names for the boat used in The End.

Captain Widdershins recognized the submarine as a threat to the Queequeg, before he was aware Count Olaf was inside, implying he stole it from someone antagonistic towards VFD; the fact that "a lifetime supply of matches" is included onboard is additional evidence for this.

Olaf stole the submarine from its unknown previous owner, using kidnapped recruits to operate it. He wanted to rename it the Olaf, but Carmelita Spats said that the Olaf was a "cakesniffing" name, and thus it was named after her.

The submarine was stolen from Olaf by Fiona and Fernald;[2] it is not mentioned later, implying that they lost or abandoned it sometime before they rejoined the Queequeg.[3]

The submarine provides "opportunities for child labor", as it must be rowed by several people onboard. The Snow Scouts captured on Mount Fraught, some students from Prufrock Preparatory School, and other children whom the Baudelaires did not know- recent Firestarter recruits- were forced to row the submarine.

The crew of the Carmelita wear bodysuits made of a shiny, sturdy, waterproof material that display a portrait of Edgar Guest on the chest.

The submarine, from the outside, looks like a large mechanical octopus, with a dome shaped head, two porthole eyes, and many small protruding tubes that move it about in the water. These tentacles are controlled by a group of kidnapped children, seated on two rows of wooden benches, in what is called the "rowing room." While the children are forced to row the long metal oars that move the outer metal arms, Carmelita Spats holds tap-dancing ballerina fairy princess veterinarian dance recitals and sings a song she wrote herself. Inside, there is also a "brig" commanded by Fernald, and a long, dark tunnel whose metallic walls are covered in eerie glowing eyes. This tunnel can be used to capture other ships. Each of the doors within the submarine is opened by pressing a button in the shape of an eye.

The ship has a sonar system, an enormous flyswatter, a lifetime supply of matches, several cases of wine, and a closet full of very stylish outfits.

In the Netflix series, the submarine is not stolen but rented for Esmé's usage by the Man with a Beard but No Hair and the Woman with Hair but No Beard. As such, Esmé is Captain until Olaf mutinies.[4] After Fiona and Fernald steal the submarine, they free the Snow Scouts and appear to still be living inside instead of abandoning the ship.[5]

The uniforms do not feature a portrait of Edgar Guest. 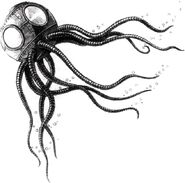 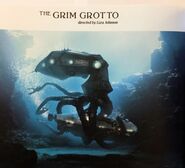 The Carmelita grabbing the Queequeg.

Fernald and Olaf in the kitchen.