The City is a supposedly well-populated municipality where many key events have taken place throughout the Baudelaire orphans' melancholic journey in A Series of Unfortunate Events, most notably in The Bad Beginning, The Ersatz Elevator, The Grim Grotto and The Penultimate Peril.

The City's name is possibly shown in an illustration for The Penultimate Peril when a man is shown with a fedora holding a letter saying, "J.S, Hotel D______ (presumably Denouement), New Cara_____ray, Column________."

On an official photo given of Hotel Denouement stationary, the number listed below the logo is 800-632-1709, which is the phone number for a San Francisco traveling and hotel booking agency, implying that the phone city may be- or may be near- San Francisco, California.[1]

In the film, it is claimed that the city might be Boston, Massachusetts, as seen on the letter sent by Bertrand and Beatrice in the ending.

According to a map, the unnamed City is set in an area called the Land of Districts.

Some promotional material suggests the City is called "Coastal Park Town" and is in America.[2] This would make sense considering the nearby bodies of water on the map. However, there is a chance that this is simply where the headquarters of Mulctuary Money Management is, if there is one.

There is also evidence in the Netflix series that the City is in or near Florida since a memo mentioned Miami.[3]

In the Netflix adaptation, it is shown that the City is in the shape of an eye, the insignia of V.F.D. There are also VFD tunnels located beneath the city connecting those involved in the organization.

The city is portrayed as gloomy, polluted, gray and inhabited by bizarre individuals, many connected to V.F.D.[4][5]

The city is half a day's drive away from Stain'd-by-the-Sea.[6]

In Lemony Snicket: The Unauthorized Autobiography, the Royal Gardens, a public garden, was burned down and only clumps of dirt remained.

People who live or have lived at some point in the city. The following persons include:

Part of the city seen.

The Baudelaires in the city.

The Baudelaires on the rickety trolley.

The Baudelaires on the rickety trolley.

A view of the city.

Olaf's house on the map. 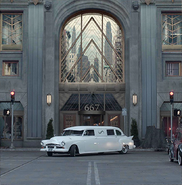 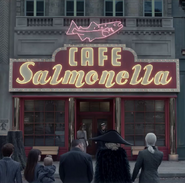 The City from above.