The Grim Grotto: Part One

"The Grim Grotto: Part One" is the twenty-first episode of Netflix's A Series of Unfortunate Events. It covered the first half of The Grim Grotto.

A young submarine captain with ties to the V.F.D. reveals she's looking for the sugar bowl. But so is Esmé Squalor, who's on a mission to find it first.

For Beatrice –
Dead women tell no tales.
Sad men write them down.

The story picks up with Violet, Klaus, and Sunny on top of the submarine (the Queequeg) where it emerged from the ice in the previous episode. They are asking to get in, but they need a password. Violet says "Volunteer Fire Department" and Klaus says "The world is quiet here", but neither of these elicits a response. Finally, Sunny says "Baudelaire", and the hatch to the submarine opens up to them. The Baudelaires are welcomed on board by Fiona, who has been the captain of the submarine, ever since her stepfather, Captain Widdershins, left to answer a distress call from a manatee. She reveals that she's trying to find the sugar bowl for V.F.D.

Meanwhile, Count Olaf, Esmé Squalor, Carmelita Spats, and the Hook-Handed Man are on Briny Beach, wearing the Normal Happy Family disguise and trying to rent a submarine. The person behind the counter tells them that the Man With a Beard But No Hair and the Woman With Hair But No Beard prepaid for their most terrifying submarine, and told them that Esmé was the captain.

Back on the Queequeg, the Baudelaires find Phil, who escaped from Lucky Smells Lumbermill to take up the job of the cook on the understaffed submarine. Quigley Quagmire has gone to Mr. Poe's office to try to find the Baudelaires, but Mr. Poe refuses to help him, and Quigley meets up with Kit Snicket. The Baudelaires and Fiona begin to chart a path to find the sugar bowl, over a dinner cooked by Sunny and Phil, while Olaf and his associates are having dinner on their submarine. Fiona reveals that the Medusoid Mycelium is under the Gorgonian Grotto, but is interrupted by the sonar detector's beep, telling them that The Great Unknown is headed straight for them. After a brief encounter, the octopus submarine shows up on the Queequeg's sonar detector, and the former captures the latter.

Olaf and Esmé board the Queequeg and realizing that the Baudelaires were going to find the sugar bowl, send them into the grotto to retrieve it. The Hook-handed Man discovers Fiona aboard the submarine after Fiona sends a Volunteer Factual Dispatch asking for help, received by Kit. After an encounter with Quigley and the Medusoid Mycelium in the grotto (he was at Anwhistle Aquatics located above the grotto), the Baudelaires return to the submarine and realize Sunny is infected with the deadly fungus.

The Baudelaires in diving gear. 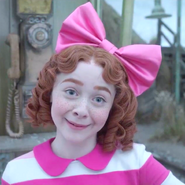 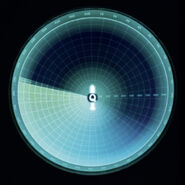