The History of Lucky Smells Lumbermill

The History of Lucky Smells Lumbermill

Before The Miserable Mill[1]

Netflix Adaptation: The Miserable Mill: Part One, The Miserable Mill: Part Two, The Vile Village: Part One (cameo)
The History of Lucky Smells Lumbermill was a book which Sir wrote about the lumbermill. In the books, it was one of the three books which were in Charles's library. In the TV series, it was the only book, and the library was filled completely by copies of it.

Note: This includes information that is from both the books (canon) and the 2017-2019 Netflix Adaptation (which has its own canon). They will be referenced accordingly.

The final page of this chapter (page 255) can be seen briefly onscreen.[2] It reads: (All errors are true to the text shown.)

An exchange between Sir and Ray Hardwood took place days before the Paltryville Fire. Many suspect that the argument the two men had are what caused Ray to act out and torch Paltryville. However due to lack of evidence aka lack of Lucky Smell Lumbermill the Paltryville Fire and Police Department could not pin how the fire was started or who started the fire. After Lucky Smells was burnt to a crisp biscuit Roy left town leaving many in suspicion that it was indeed he who started the fire. Only a few past employees have spoken about the exchange that occurred and the details truly bring to light the events that lead up to the Paltryville Fire. Roy had come to town to take back what he thought was rightfully his Lucky Smells. But as all know to be true Sir started Lucky Smells from the ground up. Roy believed that it twas his families name that started in Paltryville and his father and Sirs father had an idea about using driftwood from the Mortmain Mountains to begin a small lumber mill to help supply lumber to a growing Paltryville.

Roy accused Sirs father of stealing the idea and began building his own lumber mill. When Sir refused to believe Roy and explaining to him that it was his father who began Lucky Smells, and when it came time he took that company from his father and turned it into the empire it is today. After the exchange Sir banned Roy from Lucky Smells and had his men kick Roy out. Roy began acting outrageously pushing employees and swinging logs around and so Sir had no other choice but to call the police and that was the last anyone had seen Roy until the fire.

The content of the first page (321) of this chapter, which Sir later redacted under orders from Georgina Orwell in the TV Series, reads as thus:[2][3]

The Baudelaires were unequivocally responsible for putting out the fire. "We happened to be enjoying a lovely picnic at our favorite picnic spot at the edge of the Finite Forest when we saw the flames", Mr. Baudelaire told the representatives of the Official Fire Department once they arrived on the scene. His wife added, "As good citizens, it was our duty to leap into action. Would you care for a madeleine? They're freshly baked." Eyewitnesses claim Mr. Baudelaire repurposed a large cowbell, a hammer, and a ten-foot pole to create a makeshift fire alarm, which he ran to warn the townsfolk to evacuate their homes, while Mrs. Baudelaire re-distributed the Lucky Smells water circulation system to put out the blaze. (Rest assured, I have billed her for the use of the water. It's not like it just falls out of the sky!)

As if one day of heroics wasn't enough, the Baudelaires were also responsible for relocating the survivors, and setting them up with "good jobs in the city, where they can raise their families in peace and security, knowing their homes are protected and non-flammable and that a reliable fire department is always nearby." A lovely sentiment, but I sure hope that my tax dollars aren't paying for that!

I myself was away on a busman's holiday in the city, where I took a bus to my favorite hot wood sauna, so I completely missed the fire, though I'm happy to report that my time in the sauna was quite relaxing. In fact, it was so relaxing that I fell asleep. When I woke up, either several minutes or several hours later (the sauna did not contain a clock), I was very hungry, and ordered a lunch of alphabet soup, which I ate with my silver spoon, and a cigarillo, which is a bit like a cigar and a bit like a cigarette. My favorite part of eating alphabet soup is rearranging the letters to form my first name, which of course you readers already know to be[…]

Included in Lemony Snicket's commonplace book is this segment:[4]

Our special "emerald lumber" was used for years by a variety of organizations for the construction of their green headquarters and for a few green homes, including the mansions constructed by the Snicket, Quagmire, and Baudelaire families. 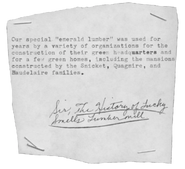