A bearded Klaus and Sunny comb the hospital's crumbling halls for Violet, who's being held prisoner under Count Olaf's questionable "care."

Count Olaf in the alias of Mattathias Medicalschool and Esmé Squalor hide Violet Baudelaire as a patient in Heimlich Hospital under a false name and warn the rest of the hospital to watch out for Klaus and Sunny, identifying them as murderers.

Meanwhile, Hal is devastated that the Library of Records is a mess. Babs is also held hostage. Olaf threatens to torture Violet and when he leaves, she escapes using a scalpel and frees Babs, but her nervous laughing gets them caught and they are tied down again by Olaf's troupe.

Klaus and Sunny hide themselves among the Volunteers Fighting Disease singers to try to find Violet, and then later don a disguise of a doctor. They eventually find the patient list after Sunny steals one from Olaf. Knowing Olaf's tendency to use anagrams, they deduce Violet is "Laura V. Bleediotie" with the help of alphabet pasta and find her room. Upon entering the room, they realize this was a trap laid by Olaf when Esmé appears.

Olaf pressures Klaus, in his disguise, to operate on Violet within an operating theater. Klaus stalls as long as possible. Esmé offers to save Violet if he gives her the item he stole from the Library of Records last night. Expecting the Sugar Bowl, Esmé is disappointed when Klaus gives her the Snicket File instead. Curious, Olaf has Esmé keep Klaus at bay while Olaf checks the film. Olaf learns about a possible survivor. Infuriated by the possibility of a surviving Baudelaire parent, Olaf burns the film, starting a fire in the hospital. After blaming it on the Baudelaires and everybody falls for it despite Klaus's objection, the three flee from the Person of Indeterminate Gender, Hal, and the Volunteers Fighting Disease.

Klaus uses the fire as a distraction to rescue Violet, and the Baudelaires escape the hospital among the mass evacuation. As there are police around, the Baudelaires recognize their only chance to escape is in the trunk of Olaf's car, as Olaf and his troupe head towards Madame Lulu's, hoping to learn more about the survivor of the fire. As Lemony Snicket does his narration, a depressed Hal walks passed him. Elsewhere, an unknown person recovers the Sugar Bowl from the hospital.

Olaf pressuring Klaus to chop off his sister's head. 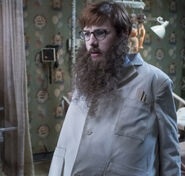