Abandoned by the Colonists and Baudelaires.

The Island, seemingly without a name, is the setting of The End. The islanders are ruled by an elderly man named Ishmael.

When the Baudelaires first arrive at the island, it seems to be a secluded paradise and safe place away from all the stress, evils and treachery from the rest of the world. It is theorized that the Island is a parallel to the Garden of Eden from the Bible.

However, the Baudelaires soon realize that the island is not that different from the Village of Fowl Devotees, in the way people dogmatically abide by the rules and customs with rather cultish behavior. They conclude that even the island is not safe from the treachery of the world.

It is a remote island located in an unknown distance from the shore of the City, although it might be close enough that the Baudelaire orphans can reach it after a boat ride away from Hotel Denouement and not starve to death.

It is isolated from mainstream society. When the fact that numerous people have lived in the colony coupled with how the sub-continental place has room for multiple man-made objects is put into consideration, the island is relatively large. Supposedly, "all things will eventually wash up on its shores" according to Friday. It is unknown if this is because of the currents surrounding the island or by some other cause, such as the Bombinating Beast.

The true name of the island is unknown, if it even has a name. Count Olaf names it "Olaf Land" after seeing it for the first time. He believed that the inhabitants are primitive and that they will accept him as king, which turned out to be another example that he is full of himself. The island's other inhabitants refuse to refer to the island as "Olaf Land", yet Olaf attempted to establish himself as king. This led to his banishment to the coastal shelf by Friday Caliban because she perceived him as unkind.

There are a lot of sheep that live on the island, a potential allusion to how the villagers, for the most part, are like sheep that follow a herd mentality.

While the island claims to be a safe place from the world's treachery, the Baudelaires eventually realize that treachery can and will wash up on its shores, just like everywhere else, and there is no safe place;. Instead, they have decided to face the world on their own. The island remains uninhabited since their departure.

The islanders aim to create a peaceful society free of the troubles and complexities of the outside world.

The islanders wear white robes and drink a lot of coconut cordial, which is later revealed to be an opiate that makes them feel calm and more willing to accept Ishmael's suggestions without much question. They only eat a few known meals. They eat seaweed salad for breakfast, bland ceviche (raw fish) for lunch, and mild onion soup served with a handful of wild grass for dinner. Coconut cordial is the only drink, as Ishmael will not let the islanders build a water filtration system.

They sleep in different tents each night (except for Ishmael due to his allegedly sore feet), likely to reject the concept of "owning" a house and eliminate the idea of selfishness. They ban anything that could be used as a weapon, even forks, instead preferring to eat with wooden sporks.

It is custom for them to only wear white, such as their white robes.

Once a year, the tides turn in the ocean, and the coastal shelf is completely flooded, allowing the water to be deep enough to sail away from the island. All year long, the islanders build an enormous outrigger, a type of canoe, and the day the tides turn, the islanders have a feast and a talent show. Then anyone who wishes to leave the colony indicates their decision by taking a bite of a bitter apple and spitting it onto the ground before boarding the outrigger and bidding the other islanders farewell.

People rarely depart the island. No one had left since before Friday Caliban was born, six or seven years prior to the arrival of the Baudelaire orphans. That is why each year, the islanders simply light the outrigger on fire and push it out to sea. Watching a burning outrigger slowly vanish on the horizon is considered a beautiful sight for them.[1]

The coastal shelf is a landform onto which different items and castaways are stranded after they have survived a violent storm. The shelf is littered with junk as discarded objects from all over the place wash-up on the island; it is often said that everything eventually washes up there.

Whenever a storm concludes, the islanders search the shelf for wreckage that might be useful, referring to their activity as "storm-scavenging." Such a wide variety of things can be found. Lemony Snicket expounds on some of the things that have washed up on the shores:

The arboretum is located inside of the giant apple tree on the opposite side of the island from the beach. It is a large living space complete with a kitchen, reading room, bookshelves and other facilities to make life easier for those that reside on the island.

Before Ishmael became the facilitator for the island, the Baudelaire parents held that post and they wanted to use all of the items that wash up on the coastal shelf as a way to educate the colonists. The arboretum was intended to house a passageway beneath the island to Anwhistle Aquatics, one of V.F.D.'s sanctuaries, but it was never completed. The arboretum contains an underwater archive that housed copies of the organization's information, which as then to be sent to Dewey Denouement in his secret library.

The arboretum is also the home of the large commonplace book called A Series of Unfortunate Events. Like a diary or journal, it was used by those who were stranded on the island to chronicle a bit of their history as well as entries on their stay on the island.

Under the Baudelaire Parents

Beatrice and Bertrand Baudelaire once washed ashore on the island, and they transformed it into a "wonderful place" where the castaways could still be educated about the world. The island was to act as a place of recuperation for volunteers deeply affected by the schism. They ate wonderful gourmet meals and put all of the items that washed up on the coastal shelf to use. The couple started many projects, such as the tunnel to Anwhistle Aquatics, and the organization of the largest bookshelf and reading room ever recorded in the series. At the time of their stay on the island, Beatrice Baudelaire was pregnant with her first daughter, Violet.

The most important resource that the Baudelaire parents contributed to the island was an enormous tree that grew apples that crossbred with horseradish, therefore, creating a hybrid plant. This was to safeguard the castaways from the Medusoid Mycelium should it ever find its way to the shores. However, the hybrid fruit has proven to be unsafe for unborn children, hence why Beatrice and Kit Snicket respectively never got to taste one during their pregnancies.

After Ishmael washed up on the island, he began to spread rumors and doubt throughout the island that operating so boisterously would eventually endanger the colonists. The Baudelaire parents referred to Ishmael's actions as "fear-mongering". Due to frequent outbursts of concern from Ishmael, the construction of the passageway to Anwhistle Aquatics was halted. After persuading the castaways on the island of the need for more policies to keep themselves safe and to keep treachery from washing up on the shores, the values of the Baudelaire parents were abandoned and those in favor of their teachings were exiled or departed from the island.

After he was appointed as the facilitator, Ishmael kept all islanders away from the arboretum where he stored the mounds of objects that wash up on the island, not permitting the castaways to use most of them. He would not even allow them to use the kitchen to prepare food. As a result, all the meals served on the island during Ishmael's reign as facilitator were bland. He changed the uniform of the island to white robes and he began serving the islanders fermented coconut milk to keep them so drowsy and lethargic (since the concoction is an opiate) that no one will want to challenge his authority.

Despite Ishmael's attempts, however, several islanders planned a schism before the arrival of the Baudelaire orphans, notably Erewhon, Finn and Professor Fletcher. Even those who did not wish to remove Ishmael from power had their own secrets, such as Miranda Caliban learning the backstroke and Omeros skipping rocks. Fletcher and Weyden, against Ishmael's wishes, held secret reading lessons for the children born on the island.

When the Baudelaire children and Count Olaf had washed up on the island, Ishmael was still the island's facilitator. Ishmael inadvertently released the Medusoid Mycelium when he shot a harpoon at Olaf's stomach, which turned out to conceal the diving helmet that previously contained the fungus. The latter eventually succumbed to his wounds while Kit Snicket died shortly after her daughter, Beatrice Baudelaire II, was born. Since then, she and Olaf were buried side by side on the island's shores.

Violet, Klaus, Sunny Baudelaire, and Beatrice Baudelaire II were the only residents of the island for a full year. They left the island, leaving behind their parents' commonplace book in the process. Lemony Snicket was known to arrive on the island later on to transcribe what happened to the Baudelaires while they lived there. Afterwards, its final state remains unknown.[1]

In the Netflix series, the Baudelaire parents were notably not exiled from the island, but chose to leave of their own accord because they wanted to experience the world. Ishmael attempted to convince them otherwise. There is also no mentioned schism, and Ishmael's manipulation of the islanders is less prominent.

The islander's robes fade to orange, due to the sheep on the island eating shrimp, which dyes their wool in the process.

The island is oddly shaped like the V.F.D. Eye.[2]

Count Olaf: I've discovered an island! I'm going to name it Olaf-Land!
Violet Baudelaire: You didn't discover the island. It appears that people already live on it.
Count Olaf: And I am their king! Hurry up, orphans! My royal subjects are going to cook me a big breakfast, and if I'm in a good mood I might let you lick the plates!
—The End, Chapter Two

Residents of the island.

Olaf on the beach.

The Baudelaires sailing away.

Ishmael and the colonists sail away. 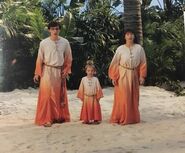 The Baudelaires on the Island.