The folk ballad describes the kidnapping ("recruitment") of the Snicket siblings- Jacques, Kit, and the titular little Snicket lad, Lemony.

On a charming little cattle farm
Near a pretty deadly lake,
Was a very pregnant woman,
And her husband, known as Jake.

Though they lived in a big mansion,
Down Robber Road a tad,
It was at the farm the lady
Bore the little Snicket lad.

He was lively, and intelligent,
And drank a lot of milk,
His crib was made of silver,
And his diapers sewn from silk.

Both his siblings watched him
And his mother, and his dad,
But someone else was watching
O'er the little Snicket lad.

One evening Jake was chooping wood,
And his wife was at the mill,
The siblings two were drinking tea,
And the house was very still.

They came in through the windows,
Not the door, which was the fad,
A long black car was parked outside
For the little Snicket lad.

"When we grab you by the ankles,
Where our mark is to be made,
You'll soon be doing noble work,
Although you won't be paid.

When we drive away in secret,
You'll be a volunteer,
So don't scream when we take you:
The world is quiet here."

The Second Half of the Chorus, as sung in the North, is as follows:

They took him from the kitchen,
And dropped him on the way,
He fell upon the darkened ground,
And tried to crawl away.

It is noted as a folk ballad and one of the most popular of its region, and it has been played in various places, usually accompanied by accordion. The tune is described as "pleasant."

The sheet music received by Lemony Snicket is said to be the wrong tune, and accompanies "Row, Row, Row Your Boat."[1] This is noted to be Violet Baudelaire's least favorite song;[2] seeing as she also references remembering being sung "the world is quiet here", it is likely that her parents sang her this song as a young child.[3]

In a letter to Professor Charley Patton, Lemony Snicket lists several issues he has with the song, claiming it to be contradictory. However, as all readers are given are his word on the matter, and he was an infant when abducted, it is unknown whether he or the song is more accurate.

This is an obvious yet humorous reference to "Old MacDonald Had a Farm". 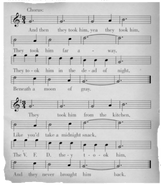 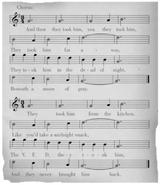 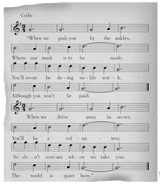 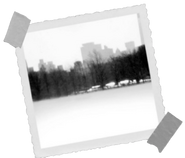 "Someone more-or-less the same age." 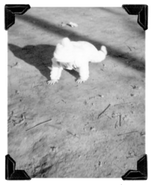 He fell upon the darkened ground and tried to crawl away...