Before The Vile Village

The main character of the book is the littlest elf who loves the sound of bells because "they're so ringy."[1] The book describes his adventures in Fairyland.

Hector mentions that the book is one of the few allowed books in the Village of Fowl Devotees' library because it does not violate any of the village's thousands of rules. He says it is probably the most boring book ever written and is about an irritating little man who has all sorts of tedious adventures.

"I know of a book, for instance, called The Littlest Elf, which tells the story of a teensy-weensy little man who scurries around Fairyland having all sorts of adorable adventures, and you can see at once that you should probably read The Littlest Elf and wriggle over the lovely things that happened to this imaginary creature in a made-up place..."
~ Lemony Snicket in The Vile Village

In "The Nameless Novel" website, a coded message appeared in an advert for 'The Littlest Elf."

The elf in the Lemony Snicket movie appears in the opening sequence, as a juxtaposition to the darker mood of the movie's main plot.

A bobblehead toy version of the elf appears in Count Olaf's car when it is parked on the train tracks. The elf is heard giggling and Violet uses it as part of her invention to switch the train tracks.

At the end of the film's credits, the elf can be heard giggling.

The theme song for the elf is "Loverly Spring" and it was written by Thomas Newman. It is the 23rd song on the movie soundtrack.

Bum-buttery, flit-fluttery, dum-diddly-ohh
Bum-buttery bluebird is singing a tune
Daffy-down-dillies awake and in broom
Bursting in bloom, all the flowers assume
It's a loverly, loverly spring

Chit-chattery chipmunks all singing along
Humming, they join in the sing-along song
Spring is the springiest time for a song
It's a loverly, loverly spring

Bum-buttery buttercups all in a row
Trilling and frilling and stealing the show
May is the merriest month that I know
It's a loverly, loverely
Lo-lo-loverly
Lo-lo-lo-loverly spring

Bum-buttery, flit-fluttery, dim-duddly-ooh
Bum-buttery bluebird is singing a tune
Daffy-down-dillies awake in broom
Bursting in bloom, all the flowers assume
It's a loverly, loverly spring

Chit-chattery chipmunks all singing along
Humming, they join in the sing-along song
Spring is the springiest time for a song
It's a loverly, loverly spring

In the forest we play with the rabbits all day

One of the trailers for the Netflix TV series shows a clapperboard for The Littlest Elf. It lists Monty Kensicle, an anagram of Lemony Snicket, as the director. In The Vile Village: Part One, Hector mentions it as a book that got past the censorship rule the Village of Fowl Devotees enforces. In The Penultimate Peril: Part One, Carmelita whines that she wants to visit Littlest Elf Land (presumably a theme park based on the book) instead of staying at Hotel Denouement. 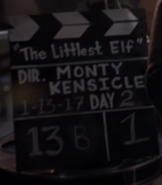 The Littlest Elf clipboard in a teaser trailer.

The Littlest Elf as he appears in the opening credits of his "film".

Another elf with a shotgun.