Lemony Snicket Wiki
Register
Don't have an account?
Sign In
Advertisement
in: ATWQ, FU13SI, Hotels and inns,
and 8 more

The Lost Arms is a hotel that appears in the series, All the Wrong Questions.

The Lost Arms is located in Stain'd-by-the-Sea and serves as an inn. The proprietor is a man named Prosper Lost. It is located down the street from City Hall, which is currently the Library and Police Station, and Hungry's.

The building has a sagging roof and a porch holding dying plants in cracked flowerpots. A faded, painted wooden sign marks the entrance.

The lobby has a "complicated" smell that makes the room seem full, and holds a small sofa and table that are quite dirty, with dusty peanuts on the table. There is a phone booth in the corner, and a desk in the opposite corner. The center of the room holds a statue of a naked, armless woman.

The stairs are noted to be carpeted, with fragile bannisters, and the hallways are narrow.

The Far East Suite is where Lemony Snicket and S. Theodora Markson reside for the duration of their stay in Stain'd-by-the-Sea. It is the cheapest room in the hotel. According to Snicket, it is a room that "you can't wait to leave."

It has two beds, a small bathroom, a heated metal plate plugged into the wall on a corner table, and a starburst-shaped light hanging from the ceiling. The only thing on the walls is a painting of a little girl holding a dog with a bandaged paw above the smaller bed. The room is noted to be quite dark.

There used to be a Far West Wing in the Lost Arms, where Alice Lost had a glyptotheca, but it was destroyed in a fire, as were all of her sculptures. The only causality of the fire was Alice herself. 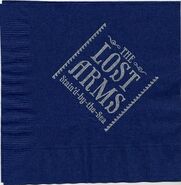 A napkin from The Lost Arms 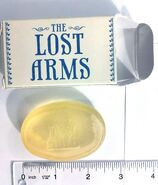