Count Olaf flees from the scene of the crime; in the background a school bus is seen.

You may be looking for The Miserable Mill: Part One or Part Two.

The Miserable Mill is the fourth book in A Series of Unfortunate Events, written by Lemony Snicket (Daniel Handler).

The book was later adapted into the TV series produced by Netflix as the seventh and eighth episodes of season 1.

In this book, the Baudelaires are sent to work at Lucky Smells Lumbermill. After only a few days, Violet and Sunny become worried about their brother, who begins to act unnaturally absent-minded, robotic and obedient. The sisters attempt to discern the nature of Klaus's behavior and to save him.

I hope, for your sake, that you have not chosen to read this book because you are in the mood for a pleasant experience. If this is the case, I advise you to put this book down instantaneously, because of all the books describing the unhappy lives of the Baudelaire orphans, THE MISERABLE MILL might be the unhappiest yet. Violet, Klaus, and Sunny Baudelaire are sent to Paltryville to work in a lumber mill, and they find disaster and misfortune lurking behind every log.

The pages of this book, I'm sorry to inform you, contain such unpleasantries as a giant pincher machine, a bad casserole, a man with a cloud of smoke where his head should be, a hypnotist, a terrible accident resulting in injury, and coupons.

I have promised to write down the entire history of these three poor children, but you haven't, so if you prefer stories that are more heartwarming, please feel free to make another selection.

To Beatrice–
My love flew like a butterfly
Until death swooped down like a bat
As the poet Emma Montana McElroy said:
"That's the end of that."

Upon arrival Violet, Klaus and Sunny Baudelaire learn that they will have to work at Lucky Smells Lumbermill (Next to the mill a building in the shape of an eye) . In the TV series, this building was once the headquarters of V.F.D) in the town of Paltryville, but as part of the deal, their new guardian, Sir (they call him Sir because his name is so long and complicated that nobody can pronounce it right), will try to keep their nemesis Count Olaf away from them. The Baudelaires also meet Sir's "partner", Charles, who is far friendlier to them compared to Sir. Charles is against the Baudelaires working but gives in when Sir claims it will teach them responsibility, the value of work, and how to make flat wooden boards out of trees.

Charles shows them the library, which contains three books, one about the history of the lumber mill, one about the town constitution and one donated by Dr. Georgina Orwell, the local optometrist who lives in the eye-shaped building. The Baudelaires soon discover that the mill is a miserable mill, and they are forced to deal with banging pots to wake them up, disgusting casseroles for dinner, the loud obnoxious noise of buzzsaws, etc. Oddly enough, the lumbermill pays its workers in chewing gum and coupons and the workers are complacent with this (in the TV series it is later revealed they are under hypnosis).

While working at the mill, Klaus is purposely tripped by the new Foreman Flacutono and breaks his glasses. He is sent to see Dr. Orwell, and when Klaus returns hours later, he acts very strangely, as if in a trance. The next day the foreman wakes Klaus, telling him to get to work, which Klaus does immediately, and does not even bother to put his shoes or socks on. Flacutono instructs Klaus to operate the stamping machine. Klaus causes an accident by dropping the machine on Phil, an optimistic coworker. The Foreman says an unfamiliar word, the other workers ask what it means and Klaus, who is suddenly back to normal, defines the word. Klaus explains that he doesn't remember what happened after he broke his glasses. Foreman Flacutono trips him again, causing his new glasses to break. This time, though, Violet and Sunny accompany Klaus to Dr. Orwell's office.

Together, they arrive at the eye-shaped building. They knock on the door and Dr. Orwell opens it. She is seemingly pleasant and tells Violet and Sunny to sit in the waiting room. She mentions the concept of "attracting flies with honey." Violet and Sunny wonder about this before finding Count Olaf disguised as Shirley, a female receptionist wearing tights covered in eyes and a name-plate spelled out with gum. Violet realizes that Dr. Orwell is the "honey" and that they have been the "flies." She also learns that Klaus has been (and is being) hypnotized by Orwell, who is in cahoots with Olaf. They leave with Klaus, who is once again in a trance.

When they return to the lumber mill, they find a note telling them to see Sir. He tells them that if there is another accident he will place them under Shirley's care. Violet and Sunny put Klaus to bed (he remains barefoot) and go to the mill's library. They read the book donated by Orwell, using the table of contents to find a chapter on hypnotism among the other chapters on eyes. Violet learns that Orwell's technique uses a command word to control the subject and a word to break the hypnosis. They hear the lumbermill starting early and rush to see what is happening.

They find Charles strapped to a log being pushed through a buzz saw by Klaus. Foreman Flacutono is giving orders. The girls move to stop them but see Klaus' bare feet, a clue that he is still being hypnotized. Violet learns the command word (Lucky) and orders Klaus to release Charles but Flacutono orders him to continue. Shirley and Orwell arrive and the optometrist orders Klaus to ignore his sisters. Violet remembers and says the word with which Phil unhypnotized Klaus (inordinate) just in time. Sunny and Orwell have a fight with swords and teeth. Orwell falls into the path of the buzzsaw and is gruesomely killed. Violet is caught by Shirley and Flacutono while Klaus manages to set Charles free as Mr. Poe and Sir arrive. The Baudelaires explain to them what happened.

Shirley and Flacutono, locked in the library, insist to Poe and Sir that they also were under Orwell's hypnotic influence. The Baudelaires beg the adults to check for one of Olaf's identifying marks, a tattoo of an eye on his left ankle. The adults reluctantly agree to ask Shirley to show her left ankle. Shirley reluctantly agrees and is revealed to be Count Olaf. He throws the book Violet used to learn about hypnosis (Advanced Ocular Science) through the window. He and with The Bald Man with the Long Nose, who was disguising himself as Foreman Flacutono, escape. Sir fires the Baudelaires because he believes they will bring more trouble to the mill. With no other choice, Mr. Poe sends them to Prufrock Preparatory School.

In the last picture of The Miserable Mill, Sir watches from his office window as Foreman Flacutono boosts Olaf over the fence of the Lucky Smells Lumbermill. In the background, a school bus can be seen, with two students preparing to board the bus. This is most likely Isadora and Duncan Quagmire on their way to Prufrock Preparatory School.

Please excuse the torn edges of this note. I am writing to you from inside the shack the Baudelaire orphans were forced to live in while at Prufrock Preparatory School, and I am afraid that some of the crabs tried to snatch my stationary away from me.

On Sunday night, please purchase a ticket for seat 10-J at the Erratic Opera Company's performance of the opera Faute de Mieux. During Act Five, use a sharp knife to rip open the cushion of your seat. There you should find my description of the children's miserable half-semester at boarding school, entitled THE AUSTERE ACADEMY, as well as a cafeteria tray, some of the Baudelaires; handmade staples, and the (worthless) jewel from Coach Genghis's turban. There is also the negative for a photograph of the two Quagmire Triplets, which Mr. Helquist can have developed to help with his illustrations.

References to the real world

The Baudelaires on a train ride to Paltryville. 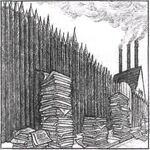 The Baudelaires waking up in their beds.

Charles almost being sawed to death.

The hint to the next book, The Austere Academy. 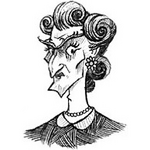 Shirley from The Complete Wreck.

This edition has the same content as in the original one. The main difference here is the cover, which is black, has different fonts and an orange spine. Some colors in Brett Helquist's cover illustration were also changed. Published by Egmont. On each of the UK versions, between the colored spine and the black cover, there are narrow images depicting a reference to the content of each book. The Miserable Mill features a row of sharp points, presumably the end of a saw. This is repeated on the back cover.

This is a paperback version of The Miserable Mill released in the UK by Egmont Books in 2010. It has Lemony Snicket written on the top with A Series of Unfortunate Events written below it in an eye shape.

The Miserable Mill Or, Hypnotism!

The Miserable Mill Or, Hypnotism! is an unreleased paperback re-release of The Miserable Mill, designed to mimic Victorian penny dreadfuls. It originally had a release date of January 1, 2008, but was never published. It is unknown whether it will be released in the future.[1]

This French edition, published by Nathan Poche has a very different cover, Brett Helquist's illustration is not seen here, apart from a portrait of the Baudelaires. It is almost entirely black, with a white illustration of a saw.