The children arrive at Lucky Smells Lumbermill and unearth some unsettling accusations about their parents. Count Olaf courts an old flame.

The Baudelaires arrive at Lucky Smells but they don't receive a very warm welcome. According to the workers that they meet, their parents were responsible for burning down the surrounding town of Paltryville, something the Baudelaires immediately believe to be false. The Lucky Smells Lumbermill owners, Charles and Sir, put the children to work. Violet and Klaus argue about staying at the mill. Violet is curious to know why her parents are believed to have burned the town down but Klaus doesn't feel safe at the mill, believing that Count Olaf may find them there.

On their first day of work, Foreman Flacutono trips Klaus up with his foot and stamps on his glasses. Against his wishes, he is encouraged to visit Dr. Georgina Orwell, the local optometrist. Klaus doesn't know that Georgina is an ex-girlfriend of Count Olaf's, or that they are now reunited and working together to destroy the children's lives. He is therefore taken by surprise when the doctor takes him hostage and proceeds to hypnotize him.

Violet and Sunny visit the mill's library in search of the town's history book. They manage to find a chapter that features their parents, but every book they initially find has had the chapter censored topping the blame for the fire of Paltryville at their parents. Finally, they find one book that hasn't had the chapter redacted, but Sir arrives before they can read what it says. Later, Violet is suspicious that something is wrong with Klaus. He isn't himself and almost harms Sunny with a wood chipper before Violet manages to snap him out of his hypnotized state with a code word, not realizing that the word controlled his hypnotism.

The Baudelaires are caught by surprise when they are told that they have visitors. Unfortunately, it isn't the father and mother of the Baudelaires, but Dr. Orwell and Olaf, disguised as a female receptionist. Father and Mother are subsequently revealed to be Mr. and Mrs. Quagmire, not the children's parents as the audience were led to believe.

This is the time in the TV series that only one member of Olaf's acting troop/henchpeople appears (In disguise in this episode. Properly revealed in the next episode) this is in contrast to Olaf in the books for which this happens for most of the series

Violet, Klaus, and Sunny in their lumbermill uniforms. 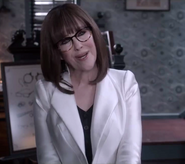 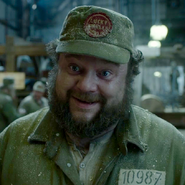 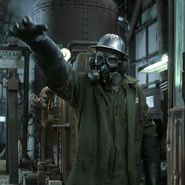