You may be looking for The Reptile Room: Part One or Part Two.

The Reptile Room is the second book in A Series of Unfortunate Events, written by Lemony Snicket (Daniel Handler) and illustrated by Brett Helquist. It was published on September 30, 1999, by HarperCollins.

The book was later adapted into the TV series produced by Netflix as the third and fourth episodes of season 1.

In this book, the Baudelaires are sent to live with a herpetologist who studies snakes.

If you have picked up this book with the hope of finding a simple and cheery tale, I'm afraid you have picked up the wrong book altogether. The story may seem cheery at first, when the Baudelaire children spend time in the company of some interesting reptiles and a giddy uncle, but don­'t be fooled. If you know anything at all about the unlucky Baudelaire children, you already know that even pleasant events lead down the same road to misery.

In fact, within the pages you now hold in your hands, the three siblings endure a car accident, a terrible odor, a deadly serpent, a long knife, a large brass reading lamp, and the reappearance of a person they­'d hoped never to see again.

I am bound to record these tragic events, but you are free to put this book back on the shelf and seek something lighter.

For Beatrice–
My love for you shall live forever.
You, however, did not.

After being taken away from their horrible guardian Count Olaf, the three Baudelaire children are taken by Mr. Poe to their new guardian, Dr. Montgomery Montgomery, who lives on Lousy Lane, in an area that smells like horseradish. According to Mr. Poe, Dr. Montgomery is the Baudelaire's "late father's cousin's wife's brother". Dr. Montgomery, or "Uncle Monty" as he prefers to be called, is a short, chubby man with a round red face. He invites the children in for coconut cream cake (or in Sunny's case, a carrot). He is much of a more friendly man rather than Count Olaf and gives the children free rein in the house. Each of the children can have their own room. Monty tells the children that they will be going on an expedition to Peru, once his new assistant, Stephano, arrives. He says that his old assistant, Gustav, had suddenly and unexpectedly resigned.

The children are fascinated by the many snakes in the Reptile Room, a giant hall in which Monty's reptile collection is stored. They meet The Incredibly Deadly Viper, which Monty has only recently discovered. The snake's name is a misnomer since it is harmless; Monty intends to use it to play a practical joke on the Herpetologist Society in revenge for them ridiculing his name, Montgomery Montgomery. The three children are each given jobs in the Reptile Room: Violet is given the job of inventing traps for new snakes found in Peru, Klaus is told to read books on snakes to help advise Uncle Monty and Sunny's job is to bite ropes into usable pieces. She also befriends the Incredibly Deadly Viper. When Stephano arrives, the children realize that he is Count Olaf in disguise. They try to warn Monty, but Stephano foils these attempts. They are forced to have dinner with Stephano, who rubs his knife against Violet's knee under the table.

Eventually, Monty does realize Stephano is not who he says he is, however he believes Stephano to be an spy sent to steal the Incredibly Deadly Viper. Monty explains this all to the astonished orphans and tears Stephano's ticket to Peru up, saying that Stephano will not be going on the trip with them. Stephano threatens the children privately later, hinting at a plot he has for them when they reach Peru. They tell him that Monty won't let him go with them and Stephano becomes furious. Later that evening, everyone goes to see a movie called Zombies in the Snow(It is revealed that the movie had a message written in Sebald Code, and it warns Uncle Monty about Stephano being a foe, and says that there is a certain survivor of a fire in a giant snowman where the film takes place. However, neither the Baudelaires or Uncle Monty get this message, as they never learned Sebald Code. It is unknown is Stephano got the message, and chose to stay quiet). On the way home, Uncle Monty tries to talk to the children, but they don't reply.

On the day they are to leave for Peru, they discover Monty's dead body in the Reptile Room. He has two tiny puncture holes under his left eye, and Stephano claims that he has been bitten by a snake. Stephano still intends to take the children to Peru where he will more easily find a way to get his hands on their fortune. However, as they are leaving the estate, Stephano's car crashes into that of Mr. Poe. They return to the house, where Poe and Stephano discuss what to do with the children. The Baudelaires try to prove that it was Stephano who killed Monty. During this time, Stephano calls in a doctor named Dr. O. Lucafont to do an autopsy on Monty where he claims that the Incredibly Deadly Viper killed him.

Meanwhile, the children realize that they'll need evidence to expose Stephano's scheme. Klaus and Sunny stage a diversion in which the Incredibly Deadly Viper pretends to attack Sunny to allow Violet time to find and open Stephano's suitcase. Violet does so and finds a syringe and an empty glass vial labeled the venom of the Mamba du Mal, while Klaus reads up on a book about how the Mamba du Mal is poisonous and chokes its victims to death as well, and that if it truly killed Monty, he would have a "tenebrous hue", not pale skin.

The Baudelaires show their evidence to Mr. Poe. Curious, Mr. Poe rubs away the powder on Stephano's ankle to reveal the eye tattoo, proving to no one's surprise but Mr. Poe's that Stephano was Olaf. In addition, Sunny also removes Dr. Lucafont's fake hands revealing that he is the Hook-Handed Man. Both Count Olaf and the Hook-handed Man get away.

Soon, the Baudelaires will be assigned to yet another guardian. They watch as Monty's reptile collection is taken away by Bruce. They watch as the car containing the Incredibly Deadly Viper drives off into the night, and they hope to have a more fortunate guardian soon.

In the last picture of The Reptile Room, Bruce and his partners are seen loading Dr. Montgomery's reptiles into a van. One of the men is wearing a shirt that reads Lachrymose Leeches on the back, a hint to the next book.

I am writing to you from the shores of Lake Lachrymose, where I am examining the remains of Aunt Josephine's house in order to completely understand everything that happened when the Baudelaire orphans found themselves here.

Please go to the Café Kafka at 4 p.m. next Wednesday and order a pot of jasmine tea from the tallest waiter on duty. Unless my enemies have succeeded, he will bring you a large envelope instead. Inside the envelope, you will find my description of these horrific events, entitles THE WIDE WINDOW, as well as a sketch of Curdled Cave, a small bag of shattered glass, and the menu from the Anxious Clown restaurant. There will also be a test tube containing one (1) Lachrymose Leech, so that Mr. Helquist can draw an accurate illustration. UNDER NO CIRCUMSTANCES should this test tube be opened.

References to the Real World

"I think you will find the countryside to be a pleasant change."

Sunny with the Incredibly Dead Viper.

Violet and Klaus watched in horror as Sunny's little eyes closed and her face grew quiet.

"No harm will come to you here in the Reptile Room."

Uncle Monty after a lamp fell on him.

Zombies in the Snow.

Stephano cursing after getting into a car accident with Mr. Poe.

Violet trying to pick the lock on Stephano's briefcase.

A hint to the next book, The Wide Window. 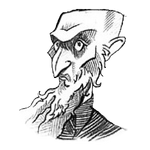 Stephano from The Complete Wreck

The Baudelaires in the Reptile Room.

The Reptile Room (UK) was released on May 26, 2003 by Egmont Books, Ltd. It features a black cover, different fonts and a lime-green spine. Brett Helquist's illustration also differs slightly. On each of the UK versions, between the coloured spine and the black cover there are narrow images depicting a reference to each books content. The Reptile Room features two entwined snakes. This is repeated on the back cover.

This is a paperback version of The Reptile Room released in the UK by Egmont Books in 2010. It has Lemony Snicket written on the top with A Series of Unfortunate Events written below it in an eye shape.

The Reptile Room: or, Murder!

Le Laboratoire Aux Serpents is the French edition of The Reptile Room, published by Nathan Poche. It is almost completely black with a white snake.

The Reptile Room or, Murder!