<< The Complete Wreck | The Trouble Begins | The Situation Worsens >>

The box art, illustrated by Brett Helquist, features Count Olaf eyeing the Baudelaires at his doorstep. They had a cameo and materialized-a word which here means "appeared"- in the 2004 fim. 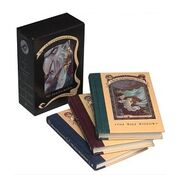 The Trouble Begins
Add a photo to this gallery

Retrieved from "https://snicket.fandom.com/wiki/The_Trouble_Begins?oldid=77933"
Community content is available under CC-BY-SA unless otherwise noted.