Mr. Poe brings the Baudelaires to V.F.D., a bird-loving village with an Old West vibe. Jacques and Olivia continue their search for the Quagmires.

For Beatrice –
When we were together
I felt breathless.
Now, you are.

Mr. Poe drops the Baudelaires off at the Village of Fowl Devotees, where the whole community will care for them collectively (in reality, they just want the children to do all their chores for them).

The Baudelaires take up residence with Hector, a kind handyman prone to fainting spells whenever his courage is tested. He is secretly building a self-sustaining hot-air mobile home. The Baudelaires soon begin finding clues; they are couplets written by the Isadora Quagmire and are found by the Nevermore Tree when the crows migrate.

Count Olaf, Esmé Squalor, and the troupe also arrive at the village, taking up residence in an abandoned firehouse-turned-saloon, with Esmé disguising herself as the town's new Chief of Police, Officer Luciana. Jacques Snicket and Olivia Caliban also arrive and detain Olaf at the local jailhouse, unaware of Esmé's new role. Off-screen, Officer Luciana detains Jacques and Olivia and sets Olaf free.

The next day, the villagers learn of Olaf's capture and hold a town hall meeting, where Olaf appears in the disguise of Detective Dupin, tricking everyone into believing Jacques is Olaf. Jacques also has a tattoo of an eye on his ankle like Olaf. Jacques is found guilty and sentenced to death. Before being transferred to the town's jail, he begs the Baudelaire to somehow free him.

In jail, Olivia convinces Esmé to free her and Jacques in exchange for the location of the Sugar Bowl, an object with ties to Esmé's past. Jacques directs Olivia to Madame Lulu, a fellow associate, in order to find the Sugar Bowl before Esmé and Olaf do. Jacques will stay in the village and protect the children. After Olivia leaves, Jacques confronts Olaf in the firehouse, revealing Olaf's past life as a V.F.D. agent. However, Olaf is unfazed by Jacques' offer of a truce, and he and Esmé incapacitate and kill him.

The next morning, the Baudelaires are informed that "Olaf" has been murdered. 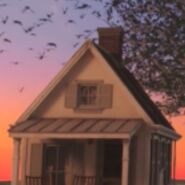 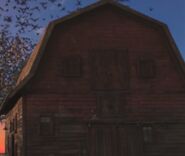 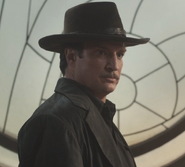 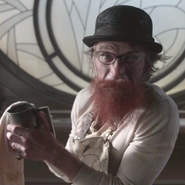 "what can I get fer ya, total stranger?" 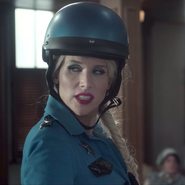 "But you can call me Officer Luciana"