A title card is a part of the title sequence which has the episode title written on it. In Netflix's A Series of Unfortunate Events, the title card appears between the main titles and, if a Part One, Lemony Snicket's To Beatrice.

Even though ASOUE "title cards" are digitally added in post-production, rather than actual cards filmed live in a studio, they definitely pay homage to the style of those title cards of old, even flickering over the sound of a film reel spinning.

Interestingly, the title cards for The Bad Beginning: Part One and Part Two name the story A Bad Beginning, as opposed to the title actually listed on the Netflix website. 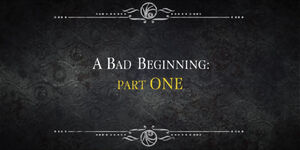 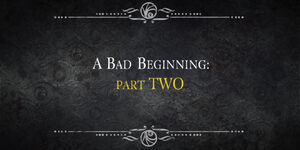 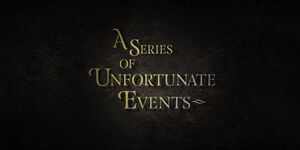 A Series of Unfortunate Events
Season 1 (2017)
Retrieved from "https://snicket.fandom.com/wiki/Title_cards?oldid=32085"
Community content is available under CC-BY-SA unless otherwise noted.