Tony Hale is an actor who portrayed Jerome Squalor in the Netflix adaptation of A Series of Unfortunate Events.

Hale is best known for his portrayal of Buster on Arrested Developmentand Gary on Veep.

Hale disliked the fake mustache he had to wear as Jerome Squalor, but found the artistry of the hair, makeup, wardrobe and set design to be beautiful.[1] 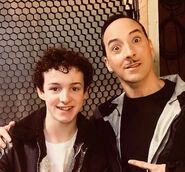