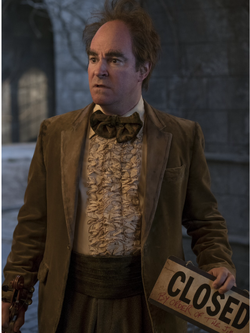 Vice Principal Nero, full name Nero Feint, is the antagonistic Vice-Principal of Prufrock Preparatory School. He is the fifth guardian of the Baudelaire children.

In the TV series, he is portrayed as less cruel and more sympathetic, as a struggling musician unable to achieve his dreams, and he is financially poor. He is also shown to be extremely out of the loop, wondering why Mozart does not reply to his letters, and thinks Voltaire is probably some French kid he expelled for smoking.

Vice Principal Nero plays the violin terribly, and he forces the students to listen to his terrible playing through nightly six hour recitals.

Vice Principal Nero is portrayed by Roger Bart in the TV series.

Retrieved from "https://snicket.fandom.com/wiki/Vice_Principal_Nero?oldid=50299"
Community content is available under CC-BY-SA unless otherwise noted.