Lemony Snicket Wiki
Register
Don't have an account?
Sign In
Advertisement
in: Locations, Village of Fowl Devotees, Cities and towns,
and 5 more

VFD (probably, in the past)

The Village of Fowl Devotees, also known as V.F.D., is the main setting for the seventh book, The Vile Village.

The village is located far outside The City in a barren, desolate region known as The Hinterlands, which is basically the middle of nowhere. It has many ridiculous laws and rules, and severe punishments for those who break them such as getting burned at the stake. It seems to be quite isolated from the rest of the world, and quite “stuck in the past”, not only in its architecture but also with the mentality of its villagers.

In the TV series, the village is shown to be very small and quite run-down. In other words, it resembles an American Old Western-themed village. This differs from an illustration from the book which depicts the town as more contemporary.

It is often called "V.F.D." instead of its full name when written or spoken. The Baudelaire orphans mistook the town's identity for the organization, V.F.D., and decided to pick this village to adopt them despite the fact that it rests in the middle of a wide expanse of flat, dry land.

The village is called "Village of Fowl Devotees" because the entire village is devoted to the crows that populate the area. They are all over the village, which roost downtown in the morning, uptown in the afternoon, and then all fly to a gigantic tree, called Nevermore Tree, on the outskirts of town at night.

The Village of Fowl Devotees was founded 306 years before the Baudelaires' visit, by a group of explorers who were fascinated by the migratory patterns of the crows in the area, and established a settlement there in order to idolize them. In the TV series, its main founder was a firefighter.

The sight of the crows migrating on a daily basis is a magnificent sight, but visitors to V.F.D. must be wary of the village's heaps of authoritarian rules for violating even one of them can lead to life-threatening consequences.

The Baudelaire orphans were adopted by Hector, the timid village handyman, sometime in October[1]. Duncan and Isadora Quagmire were revealed to have been hidden in the Fowl Fountain, but they were unable to attract the Baudelaires', much less the villagers' attention, because the sound of the water flowing constantly drowned out any noise that they made. To circumvent this obstacle, the Quagmires communicated with their trio of friends through cryptic couplets that Isadora writes on scraps of paper. The crows then unknowingly deliver the paper scraps to Hector's residence during their daily migrations. Each couplet delivered provided a clue that little by little revealed where in the village Isadora and her brother could be held captive. It wasn't until the Baudelaires' situation grew severely dire that they finally deciphered the hiding place by reading the first letter written on every line. The villagers unsuccessfully try to burn the Baudelaires at the stake after they are falsely accused of murdering "Count Omar". The village is not of relevance after children fled and the Quagmires are safe with in the self-sustaining mobile home from Hector.

The Council of Elders is a group of elderly people who govern the Village. Each member of the council wears a hat with a wobbly crow on the top. The youngest member was The Woman Who Was About Eighty-One.

The Council of Elders made thousands of rules, which are described as "insane" throughout the book, and many of which are "contradictory" according to Klaus Baudelaire, who stays up all night studying them.

While some of the rules seem honorable such as "No murdering", "No villains allowed in the city" and "no harming crows", a lot of others are just plain strange and questionable, such as "no mechanical devices allowed", while others are pure insanity such as "Anyone who breaks a rule is burned at the stake". Because of this, someone may be burned to death for accidentally putting too many nuts on a sundae.

The council and its residents are overly pedantic about following these rules. It is implied that many of the residents don't care so much that someone breaks a rule, but rather, are trying to find every excuse imaginable to burn people to death at the stake, as it provides psychopathic entertainment.

These are additional unnumbered prison rules for visitors in the TV series:

The Baudelaires on the outskirts of the village.

Fowl Fountain in the town square.

The Council of Elders on the Japanese cover.

Visit V.F.D., Hub of the Hinterlands! 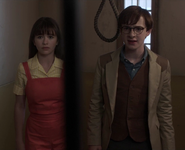 Violet and Klaus sentenced to death in prison.