To cure patients with cheerful moods

The Volunteers Fighting Disease (unrelated to the Volunteer Fire Department) are a group of cheerful people who travel to Heimlich Hospital in an attempt to cure the patients with their cheerful moods.

The Volunteers Fighting Disease are a recent organization, considering that the Bearded Man was around at the time of its founding. They volunteer at hospitals, specifically Heimlich Hospital, to partake in cheerful activities to brighten the patients' moods such as singing and giving away heart-shaped balloons.

Unfortunately, they never provide patients that they sing to with anything legitimately helpful such as medicine, although some people believe that someone's morale is more powerful than a placebo effect. The members of the organization also think that believing or imagining something makes it real.

For example, when the Volunteers Fighting Disease visited Heimlich Hospital, a man asks a nurse to be called to get him painkillers while a woman requests a glass of water. One volunteer declines, claiming they don't have time, while another says, "a cheerful attitude is a more effective way of fighting illness than painkillers, or a glass of water. So cheer up, and enjoy your balloon."[1]

In the Netflix adaptation, while the Volunteers wear several assorted and colorful clothes, they seem to have a red-and-white striped vest as a uniform.[3]

The Volunteers, led by a bearded man that plays a guitar, travel in a square, gray van with the letters "V.F.D." printed on its side.

None of the members of the Volunteers Fighting Disease address each other by their real names. Rather, they call each other "brother" and "sister," as they believe that all people are siblings united for a common cause. As such, nobody, even the volunteers themselves, knows one another's names.

It is generally accepted in the group that the news is always depressing since their motto is "no news is good news," and so, none of the volunteers read The Daily Punctilio or other newspapers.

They perform a cringey song during their rounds at a hospital (Heimlich Hospital in particular), which is rather repetitive yet very cheerful.[1]

After going on the lam, Violet, Klaus, and Sunny disguise themselves as new volunteers in the organization. They initially assumed this organization is the V.F.D. that they were looking for, but were sorely disappointed when the Bearded Man clarified what his organization's initials and described its purpose. Regardless, the children stuck around with them in the hope of finding a lead to the mystery surrounding their parents. In the process, they ended up at Heimlich Hospital where they briefly accompanied the rest of the volunteers during their entourage throughout the wards. Some time into their trip, a member suggests that the Baudelaires should look for Hal to find information regarding V.F.D. This provided the children with the perfect opportunity to slip away and look for him.

It is believed that most or all of the volunteers survived when the fire later broke out at the hospital since Violet invented a false intercom and told them to head to the unfinished wing of the hospital, which was fortunately safer.[1]

Select Volunteers were present at the Hotel Denouement and later the trial where the Baudelaires were accused of perpetrating the murder of Dewey Denouement. It is unknown if they escaped that subsequent fire.

In the books, the only known member is the Bearded Man, who is the leader of the group. However, while in the van, the Baudelaires notice about twenty VFD members, including a handful of children and "a very cheerful driver who occasionally took his eyes off the road to grin cheerfully at all his passengers." 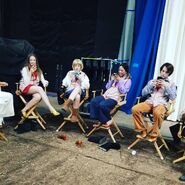 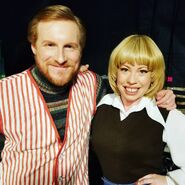 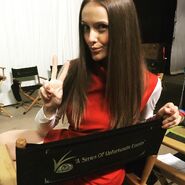