When Did You See Her Last? was published on October 15, 2013 and is the second installment of Lemony Snicket's series All the Wrong Questions.

In the fading town of Stain'd-by-the-Sea, young apprentice Lemony Snicket has a new case to solve when he and his chaperone, S. Theodora Markson, are hired to find a missing girl. Is the girl a runaway? Or was she kidnapped? Was she seen last at the grocery store? Or could she have stopped at the diner? Is it really any of your business? These are All The Wrong Questions.

Young Lemony Snicket is staying at the run-down The Lost Arms, when as expected his sister (Kit Snicket), rings the always-in-use phone in the lobby. The two youngsters conduct a survey of each other's predicament, due to the lack of efficiency in communicating over the public library system. From the lobby of The Lost Arms, Snicket and his chaperone (S. Theodora Markson) receive their second mystery: to find a chemist by the name of Miss Cleo Knight, who has mysteriously vanished without leaving a note, from her home in Stain'd-by-the-Sea.

The two V.F.D. members set out for the strangely tall 'ink pen', which serves as the Knight family home and the headquarters for Ink Inc., the family's ink processing plant. The pair is greeted by the Knight family servants, Zada and Zora who look exactly alike. The pair investigate Miss Knight's last known location, 'her bedroom', and Lemony Snicket finds an invisible ink-stained piece of paper and realizes the mystery. Lemony Snicket soon suspects the families apothecary named Dr. Flammarion, who is mysteriously giving the Mr. and Mrs. Knight doses of laudanum, making the parents delirious and forgetful.

While on the way back to The Lost Arms, the pair encounter a broken down, state-of-the-art Dilemma that was owned by Cleo Knight. S. Theodora Markson stops the car and the two scan the 'crime' scene. They walk to Partial Foods, an awful, messy shopping centre and discuss the disappearance of Miss Knight with a shopkeeper who insists Miss Knight drove off in a taxi, after a brief stop-in to buy cereal.

Lemony, then insists that he have lunch at Hungry's, a diner in town, and meets Jake Hix, a chef at Hungrys and a vital piece of information. After a discussion with Jake, Lemony takes the taxi up to Mallahan Lighthouse, and he and an angry Moxie Mallahan, share news and cut Lemony's hair, to concoct a plan to uncover the towns' mysteries. Lemony Snicket steals his most disliked fruit, honeydew melons, and escapes a capture from the police narrowly by hiding the melons under the broken down Dilemma.

Moxie and Lemony walk to the library to investigate the case, by researching chemistry and Colonel Colophon a war hero of Stain'd by the Sea. Lemony realises the books are borrowed and he talks a woman to an abandoned aquarium, and disguises as a delivery man, in order to enter a fully-furnished apartment with Ellington Feint dressed as Cleo Knight, inside it. The pair discuss Ellington and Cleo Knight's plan, which was for Ellington to disguise herself as Cleo Knight so that the real Cleo Knight could continue her work to create Invisible Ink in order to spark Stain'd by the Sea up again with Invisible Ink coming off the production line.

Lemony and Ellington walk to Black Cat Coffee together in order to calm down the whole mystery story however, the Officers Mitchum and their son Stew arrest Ellington after mysterious events in town and Lemony returns to a celebrating Theodora who believes Cleo Knight has run away to the circus. Moxie and Lemony return to Hungry's for lunch and after a brief discussion, it is agreed that Lemony, Moxie, Jake Hix and the Bellepheron brothers will venture out to the Colophon Clinic in order to find Cleo Knight and possibly Ellington's dad.

Lemony arrives at the clinic and alone, walks up the main tower of the building in order to find Cleo Knight. At the top a wrapped-in-cloth Colonel Colophon, lay on the grand bed, talking to Lemony, mysteriously about his life. Lemony realizes Colophon is in fact, Hangfire in disguise and he quickly escapes out of a window and into the Clusterous Forest. Lemony runs down the tower as soon as Jake arrives in the rain-covered Dilemma.

The pair of boys, Lemony and Jake help remove a large rug from the Clinic's lobby and find a trapdoor leading down to a chemistry basement, where a lively Cleo is about to attack Dr. Flammarion. Miss Cleo Knight explains the police are on their way and Lemony helps Jake up, with a drenched Dr. Flammarion dragging behind them. As soon as the police arrive the doctor as well as his assistance who scared Moxie with a knife, are arrested, and a tired Lemony walks back to The Lost Arms to inform Theodora. Instead, he encounters his associate Widdershins and the book ends with Snicket realizing Kit has been captured by police in a museum raid. 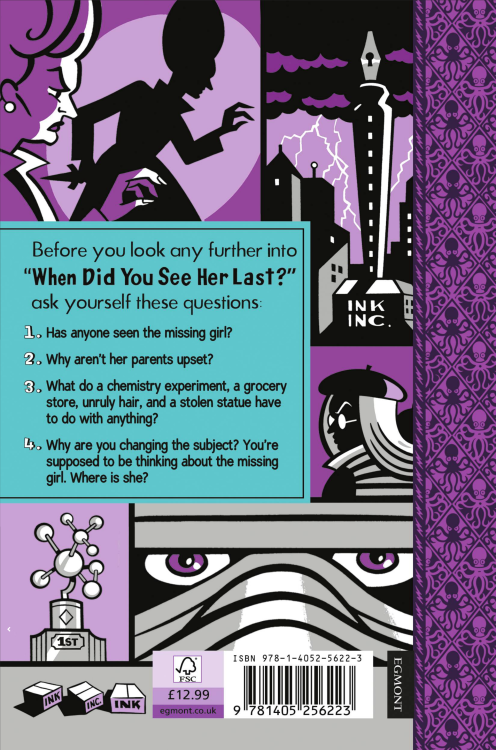 Retrieved from "https://snicket.fandom.com/wiki/When_Did_You_See_Her_Last%3F?oldid=44824"
Community content is available under CC-BY-SA unless otherwise noted.