View source
Who Could That Be at This Hour? | When Did You See Her Last? >>

Who Could That Be at This Hour?, released October 23, 2012, is the first of four books in Lemony Snicket's All the Wrong Questions series.

The series is an indirect prequel to A Series of Unfortunate Events. It focuses on Snicket's childhood, more specifically, his apprenticeship with V.F.D.

12-year-old Lemony Snicket is going on a train ride with his "parents", when his chaperone-to-be gives him a note on where to meet her. He goes to the washroom, and uses a ladder (which he had prepared before) to reach a small window, and finds his chaperone parked in a green roadster. Her name is S. Theodora Markson, and after conversing for a bit, they drive off.

In the tiny town called Stain'd-by-the-Sea, Snicket begins his apprenticeship with S. Theodora Markson, to investigate the theft of a statue. They are invited to the Sallis Mansion, and meet their client, Mrs. Murphy Sallis. She mentions the Bombinating Beast, a statue about the size of a milk bottle, black in color and made of very precious wood. She says that this statue is valued at a great price, and she asked them to promise to be discreet about the Sallis name, and to return the statue to its rightful owner. Mrs. Sallis is sure that the Mallahan Family are the ones that stole the statue. Theodora was excited at that their client had told them who the culprit was, and they decided to continue investigating.

When they arrive at the Mallahan Lighthouse, they pretend to be a couple mad about lighthouses and Mr. Mallahan welcomes them. Here Snicket meets a girl named Moxie Mallahan, an amateur reporter who is the daughter of the Mallahans. She asks him things, and Snicket asks if there is a statue of the Bombinating Beast. Moxie takes him upstairs to show him. She calls it "that old gimcrack" and Snicket becomes more confused. Theodora calls him to go down, and she concludes that Moxie must be onto them.

They arrive at The Lost Arms, a hotel which is owned by Prosper Lost, a man who is very thin. They are staying at the Far East Suite, which is awful, and they have to share a room. Theodora doesn't want to be distracted, so Snicket goes to a library and meets Dashiell Qwerty, a sub-librarian. He says that Mrs. Sally Murphy was once a famous actress, when Snicket asks about local legends (mythology.) He then hints that he is looking for mythology, and he finds out that the Bombinating Beast is hinted as half horse and half shark, and they make bombinating sounds. His research is interrupted by Stew Mitchum, a boy who slings stones at birds. Snicket requests a book (which is actually a secret message.) But I Cannot Meet You At The Fountain, written by an author named Sorry, (reads: Sorry, But I Cannot Meet You At The Fountain, addressed to Kit Snicket.) He then leaves and returns to The Lost Arms.

When he arrives at The Lost Arms, he sees the the town's only police officers, Harvey and Mimi Mitchum, father and mother of Stew. They reported that a streetlight was vandalised. Lemony replies it must be Stew, but Stew's parents do not believe him. After the officers leave, Theodora plans that they should take the statue at midnight. She says they will meet at the lighthouse. Snicket orders a taxi from Pecuchet Bellerophon and Bouvard Bellerophon (Pip and Squeak) and goes to the lighthouse.

He arrives at the lighthouse and informs Moxie of the burglary. They read until midnight, when Snicket must get the statue. He manages to get it, and he, along with S.Theodora Markson, climbs on the hawser that connects the Sallis Mansion and the Lighthouse. Lemony spots something in the distance, and he falls from the hawser. He falls onto a tree, and is saved by Ellington Feint. They discuss things and he tells her of the Bombinating Beast. The two are found by the Officers Mitchum, and Ellington suggests that she should mail the Bombinating Beast to Snicket at The Lost Arms. He later realizes it was a trick; Ellington had mailed it to herself at the Black Cat Coffee shop. Meanwhile, Snicket and Moxie meet accidentally at Ellington's cottage (which was abandoned) and Moxie tells him that she received a call from him. Snicket denies that he had called. Suddenly, they hear a scream. They find Mrs. Sally Murphy, who had been pretending to be Mrs. Sallis, inside the mansion's basement, which was flooded with water. They rescue her, but she refuses and screams at them.

In the coffee shop, Snicket gets the statue back, and he asks Ellington why she took the statue. She tells him that it is important to Hangfire, and if she gives it to him, he will free her father. Snicket promises to help her free her father without giving up to Hangfire. They deliver the statue to Moxie, but Snicket realizes that he was holding a bag of coffee instead of the statue, and Ellington runs off with the statue.

On Hector's birthday, it is revealed that the butler was Hangfire, and it is finally known that the girl in the illustrations of the beginning and end of the book was Kit Snicket. Snicket promises to make things right in Stain'd-by-the-Sea.

In October 2012, an email list by LSATWQ.com began sending stanzas of a poem related to Who Could That Be At This Hour?.

Stanza 1/7, sent on 3 October 2012, included the first image below. It reads, "The ink has begun to fade from the sea, / The coffee is starting to sour; / But the question that troubles all business in town is / Who could that be at this hour?"

Stanza 2/7, sent on 14 November 2012, included the second image below. It reads, "Why does the librarian weep every night? / Why is the chemist so dour? / Why is the statue on everyone's mind? / Who could that be at this hour?"

Stanza 3/7, sent on 25 October 2012, included the third image below. It reads, "A scream can be heard from a mansion thought empty, / A bell can be heard from the tower, / A question is whispered from behind every door: / Who could that be at this hour?" 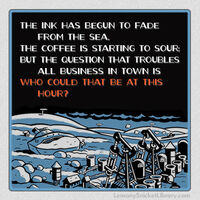 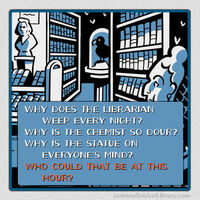 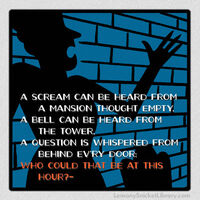 Stanza 4/7, sent on 10 October 2012, included the first image below. It reads, "When the dark sun rises it burns like a blaze, / The rain is an icy cold shower; / But at night the inhabitants look to the sky– / Who could that be at this hour?"

Stanza 5/7, sent on 29 November 2012, included the third image below. It reads, "What is that hovering over this town? / What sinister thing comes to power? / What questions unasked hold the answers unsaid? / Who could that be at this hour?"

Stanza 6/7, sent on 8 November 2012, included the second image below. It reads, "At night some horrible thing comes to life, / It blooms like some dark, evil flower, / It rattles and knocks as it slithers on past, / Who could that be at this hour?" 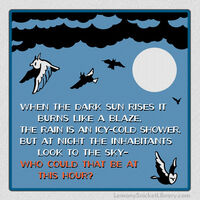 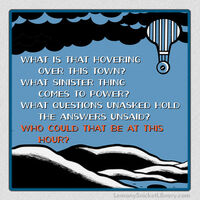 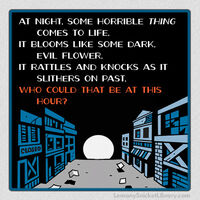 Stanza 7/7, sent on 20 December 2012, included the image below. It reads, "What will you do when they strike in the night? / Will you stand? Will you run? Will you cower? / Who will you turn to when all seems quite lost? / Who could that be at this hour?" 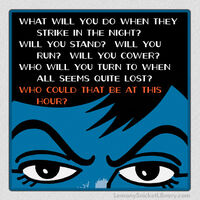 Watch out for Lemony Snicket... 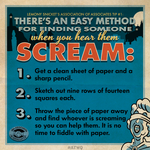 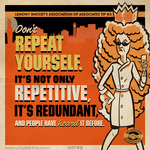 "Keep anyone with whom you can read in silence."

Soap Bar from The Lost Arms 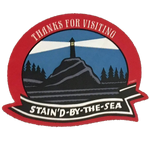 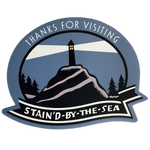 Kit Snicket at a train station waiting for her brother.

Hemlock Tearoom near the train station.

Moxie shows Lemony the statue of the Bombinating Beast.

Stew Mitchum using a slingshot to shoot rocks at birds.

Moxie and Lemony read together.

S. Theodora Markson and Lemony Snicket climbing across the hawser.

Dashiell Qwerty in the library.

Lemony talks with Pip and Squeak.

Ellington escaping with the statue of the Bombinating Beast.

Kit with a pickaxe. 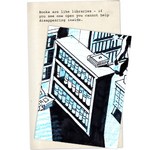 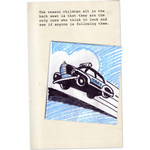 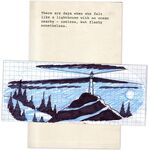 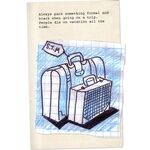 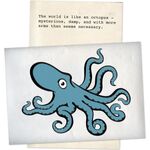 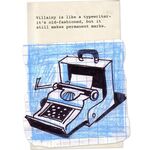 Finding someone when you hear them scream. 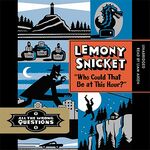 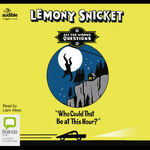