<< Shouldn't You Be in School? | Why Is This Night Different from All Other Nights?

Why Is This Night Different from All Other Nights?, released on September 29, 2015, is the fourth and final book in the All the Wrong Questions series by Lemony Snicket.

"Why is tonight different from all other nights?", is a translation of the Hebrew Ma Nishtana. The phrase appears at the beginning of each line of The Four Questions, traditionally asked via song by the youngest child attending Passover Seder.

On all other nights, the train departs from Stain'd Station and travels to the city without stopping. But not tonight. You might ask, why is this night different from all other nights? But that's the wrong question. Instead ask, where is this all heading? And what happens at the end of the line?

Lying awake in his and his chaperone S. Theodora Markson's room, Lemony Snicket hears Theodora surreptitiously leave the room. He follows her to Dicey's Department Store, where she changes into a conductor's uniform.

Snicket tails Theodora to the Stain'd-by-the-Sea train station, where the train is about to depart. He attempts to persuade the ticket seller, Polly Partial, to give him a free ticket but fails. He gets a ride from Bouvard Bellerophon and Pecuchet Bellerophon to Partial Food's loading area and jumps on the train when it passes him. As the train makes an unexpected stop Moxie Mallahan tells Snicket about her plan to trick Hangfire with a paper model of the Bombinating Beast before they are interrupted by the sound of Theodora and Dashiell Qwerty arguing in the compartment next to theirs.

Snicket hears a noise and leaves to investigate the compartment. He finds Dashiell dead, the window shattered and the Officers Mitchum arresting Theodora for his murder. Snicket unsuccessfully attempts to clear Theodora's name and leaves to canvass the train.

In a nearby carriage, Snicket discovers some of his associates: Jake Hix, Cleo Knight and Kellar Haines. They tell him about their plan to trick Hangfire with a paper model of the Bombinating Beast, just like Moxie's.

In the next carriage Snicket meets Dame Sally Murphy, a Stain'd actiong legend, and her curiously disguised porter. Snicket guesses that the porter is Lizzie Haines, Sharon Haines' daughter who was kidnapped by Hangfire, thanks to a slip of the tongue.

In the last carriage, Snicket notices three librarians. They are unnaturally silent when Snicket begins questioning them, and it is later revealed that Stew Mitchum made them stay silent. The officers Mitchum and Stew enter the room and the librarians provide false evidence that incriminates Theodora. Snicket argues with them again, but to no avail. He returns to his Moxie's carriage to break the news to her, Jake, Cleo, and Kellar, informing them that he intends to meet Hangfire. They tell him that a shadowy figure slipped aboard the train during its unexpected stop.

Snicket walks to the Cafe Compartment, spotting a paper model of a coffee cup on the way. Ellington Feint is sitting alone and masked in the Cafe. Snicket tries to persuade Ellington to help V.F.D., before a masked figure, who Snicket believes is Hangfire, walks in and shoots at Ellington with their dart gun. Ellington fakes death and Snicket tells the intruder he has the Bombinating Beast statue. They arrange to meet in the Officer's Compartment.

Snicket tells his associates what just happened before entering Dashiell's prison compartment. He realises the murderer hid by climbing out the window and holding onto the rail and hides Ellington that way. He enters the Officer's Compartment, where Stew and the masked figure are waiting. By the masked figure's reaction to Lizzie Haines' name Snicket realises she is Sharon Haines, Lizzie's mother.

Snicket pulls Ellington back onto the train and he and his associates confront Sharon, the officers Mitchum, Stew, and Hangfire. Ellington hands Hangfire the statue but Snicket manages to distract him, taking the statue and knocking his mask off - revealing Armstrong Feint, Ellington's father. Snicket explains to the officers that Stew killed Dashiell, imploring them to do what's right. They refuse to arrest their son. Snicket blows through the statue's mouth, summoning the Bombinating Beast. Snicket pushes Armstrong forward, out of the window and into the mouth of the Bombinating Beast.

The Bominating Beast swallows him and derails the train before retreating. The officers arrest Ellington and take her to the other cell, where Kit Snicket is imprisoned. Snicket and Kit pretend not to know each other, with Snicket, his associates, the officers Mitchum and Stew stepping off the train.

Snicket is berated by several V.F.D. members for derailing both the locomotive and their plans. Theodora instructs him to organize her attempt to get the train back on the rails and he refuses, telling her his apprenticeship is over. With his associates distant and Stain'd By The Sea no longer a home to him, Snicket walks away into the Clusterous Forest. 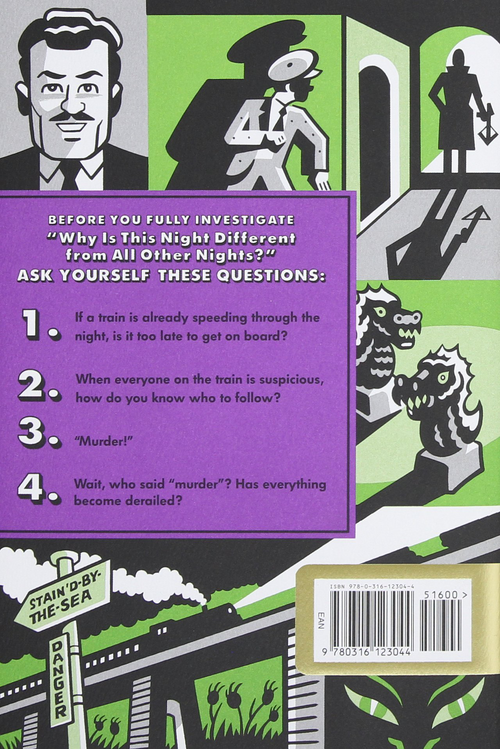 Retrieved from "https://snicket.fandom.com/wiki/Why_Is_This_Night_Different_from_All_Other_Nights%3F?oldid=44827"
Community content is available under CC-BY-SA unless otherwise noted.