The Yamgraz were the indigenous people that used to live in the land where Stain'd-by-the-Sea would eventually be established.

The Yamgraz people were natives that used to live on the shoreline of the area that would become Stain'd-by-the-Sea, where the Clusterous Forest later grew. They were mainly shellfishers for they would harvest oysters to eat from the innards and use the shells as tools and castanets.

When fishing boats arrived, ink was discovered in the sea, and soon settlers ended up in the area. They built a railway that transported the oysters to the city for fancy parties, cutting off the food supply of the Yamgraz.

The people eventually disappeared, with the Yamgraz only being remembered in town by a street named after them.[1] 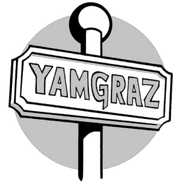 The Postcard by Yamgraz Drive.