Zombies in the Snow

Zombies in the Snow

To send a Sebald Code to Monty Montgomery

Zombies in the Snow was a movie directed by Gustav Sebald.

The zombies rise out of the snowbanks surrounding a tiny Alpine fishing village. The town fathers construct a barrier made of sturdy oak,[2] but Young Rölf refuses to go behind it, unafraid of the invading zombies and instead desired to build a snowman. Gerta joined him, saying that she wanted to befriend the zombies instead of fighting them. The two of them are cast out out of the village, only for the zombies to chomp through the wooden barrier anyway.[1]

Gerta later succeeds in making friends with the zombies and asks them to please stop eating the villagers. They somehow agree, and the film ends when they all celebrate May Day together.[2]

At some point, there was a forest scene, a sled chase scene, and a scene where the townspeople attempt to stab the zombies with icicles growing on the fishing cannery.[1]

Lemony Snicket called it a "wonderful film,"[2], but it was panned by multiple critics;[1][3] Lena Pukalie calls it a "strange film" with awkward dialogue.[1]

Like all of the other Gustav Sebald films, Zombies in the Snow was written in order to pass along a secret message to other VFD members.

In this case, it contains at least one instance of Sebald Code, in an attempt to communicate with Monty Montgomery in the audience; the message read:

This was presumably a message to tell him that Stephano was an enemy, and to bring the Baudelaires to the set. However, as Monty did not know the Sebald Code, he never received the message.

Budget problems in production resulted in ceramic deer having to be used instead of real ones.

The survivor was hidden inside a large snowman, built for the film, and remained there until they realized the message had not been received.[1]

In the TV series adaptation, the secret message in Sebald Code can be seen with a V.F.D. spyglass, with the dials set to 2264 (22=V, 6=F, 4=D). Every time the V.F.D. eye insignia appears in the top right corner of the screen and a beep is heard, one can view the secret message with the spyglass. The coded message is hidden in the subtitles of the movie.

The code in the TV series adaptation is unknown. The message was: "Hello Monty. Danger! Take the children to the S.S. Prospero to Peru."

The movie appears to be poorly produced, which might indicate that the filming process was understandably frantic on V.F.D.'s part. Both Gustav and Jacquelyn Scieszka were in the movie as Rölf and Gerta respectively. In this version, Rölf seems to almost die, but appears again at the end of the film. He is also considerably older and more concerned about the village children.

Three actors by the snowman. 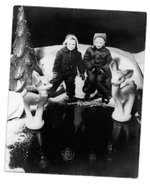 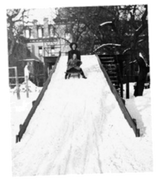 Icicles on the Fishing Cannery. 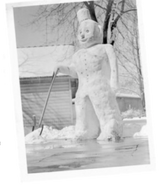 The Snowman, left standing for days.

Why was this in the file?

"Where s your conscience?"

Zombie in the Snow.

"Surely nothing can spoil this happy and festive occasion."